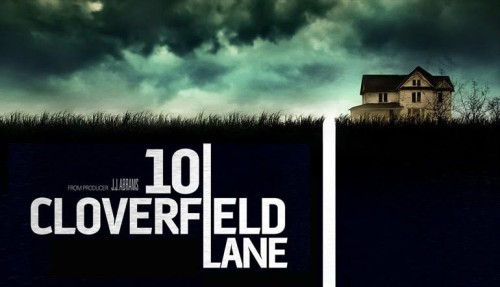 Although not strictly a Cloverfield sequel this is, nonetheless, a worthy addition to its alien-attack franchise. However, it is definitely not a found footage movie nor solely a sci-fi movie about war-mongering extraterrestrials. JJ Abrams, the brains behind the production, was also director of the first movie and more recently Star Wars but here wears his executive producer hat in bringing this movie to the big screen. And he does so with everything shrouded in mystery and secrecy. During pre-production it had several title changes to confuse press snoopers and make their wait ever more nail-biting.

The film opens with a young woman involved in a car accident on a Louisiana highway and on regaining consciousness Michelle (Mary Elizabeth Winstead) finds herself chained to a cell-like room in an underground bunker. This is the ‘home’ of a slightly deranged looking, bearded loner played by John Goodman. He claims an alien chemical attack has more or less wiped out mankind making the air harmful for at least a year. She struggles to accept this and suspects he may have more nefarious motives until what he has said is confirmed by Emmett, a local man who has also sought shelter in the bunker. Thereafter, a Hitchcockian thriller unfolds full of subtle plot twists and edge of the seat revelations as she becomes more aware of the reality of her immediate surroundings and the fate of the wider world beyond their confines.

These early scenes show how abruptly it has shrugged off the Cloverfield model and is sticking to a minimalist, suspense filled storytelling device that is unnervingly effective. You’re expecting monsters – big ones –  and get nothing. You get edgy conversation between the three protagonists at a tense dinner table with the post-apocalyptic loner Howard flying off the handle a couple of times for the smallest misdemeanour. This sort of well-worked characterisation draws you into their greater depths in much the way a novel does. It has to be said, most movies – big budget tent-pole fare in general and sci-fi and horror in particular, don’t really have a patient enough build to commit to this much intrigue. A certain Mr Hitchcock certainly did. I can see how this psychological thriller has embraced his more subtle methods as regards scrambling human emotions.

It definitely keeps you guessing. Just as you think you know what the movie’s all about it goes on a roundabout detour that has you re-evaluating the characters all over again. Particularly Howard. Is he their saviour or their captor? His dark moods and those keys that never leave his side suggest a control freak with violence bubbling just below the surface yet he throws us by also portraying old-fashioned, gentlemanly values and a certain self-sacrifice and service. At least when he’s not threatening to duck them in a vat of perchloric acid that will dissolve them to the bone.

90% of the film is refreshing film-making that is inventive in the way it meanders through this claustrophobic, minimalist setting. The other 10% is big monster stuff. You’ve seen it before and done better. It’s a bit of a disappointment considering the flawless build up. In fact, that final scene with the monster/extraterrestrial is so obvious that, without revealing any spoilers, it’s the equivalent of being run over by a neon green double decker bus travelling at 1mph sirens blaring. Also where have I seen that ending before? That’s it! In loads of other films. Still I’m going to stick my neck out and say that even though its truncated finale feels too much like a franchise dollar sign than a film within itself, it’s still likely to be one of the more memorable movies of 2016. The 90% swings it for me!