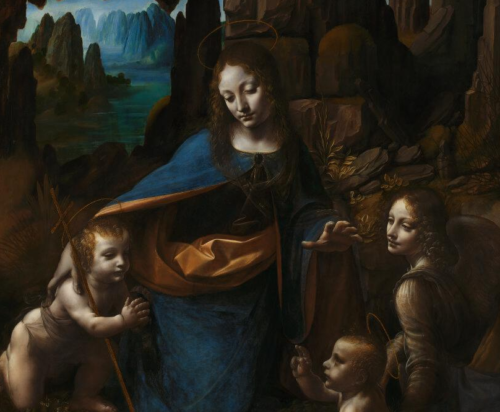 It’s a remarkable legacy to have completed only 15 paintings (known to be in existence) yet still be recognised as one of the greatest artists in history. This extraordinary polymath has produced work that survives today as undoubted cultural icons and his early working life in Milan provided the apprenticeship for much of these works and certainly his Virgin of the Rocks which is the focus of this current exhibition at the National Gallery.

Leonardo da Vinci painted two versions – the first now hangs in the Louvre, Paris while the National Gallery acquired the second in 1880 from the Earl of Suffolk for 9,000 guineas. At the time, there was some doubt as to whether it was a genuine Leonardo, with some historians claiming it was by one of his associates Bernardino Luini.

The Florentine master was a stickler for geometrical and geological accuracy yet the National Gallery version has flowers with botanically incorrect details such as unusual numbers of leaves. Renaissance historian Charles Hope described the botany as “crazy in one but not the other.” However, a decade after major conservation work in 2009, it has been established that Leonardo was, indeed, the author of the work.

The quibble over authenticity now a forgotten memory as the Leonardo: Experience A Masterpiece exhibition ushers the great artist into the digital, hi-tech world with an innovative, immersive exhibition with interactive elements designed to draw in a curious new crowd who are, perhaps, unfamiliar with the art world.

Regarded today as a stand-alone painting, it was originally conceived as part of an altarpiece at the Chapel of The Immaculate Conception in San Francesco Grande, Milan and painted on wooden panel. The church no longer exists after Napoleon had it destroyed but the National Gallery invites you to reimagine the work in its original setting using digital technology and projections which recreate the chapel and altarpiece.

This Imagined Chapel is one of four different spaces which invite you to experience the painting in new ways and enter The Mind of Leonardo (the title of another space). The Light and Shadow Experiment space gives visitors the opportunity to play around with the contrast on paintings using interactive elements. You can give The Virgin of the Rocks some heavy duty chiaroscuro shadows to get it looking like a Baroque piece and even change the direction upon which the light falls on subjects and landscape models.

In The Studio space a narration from Marika Spring, Head of Science at the National Gallery, informs about the infra-red imaging technology which revealed zinc elements beneath his painting and the presence of key brown and blue pigment areas that indicated Leonardo had marked out a completely different painting before starting over (pentimenti).

The hallowed atmosphere is immediately sensed as you enter this room and learn more about his processes; the reverence increases significantly as the choral sounds from the ‘Imagined Chapel’ filter through. This may not be San Francesco Grande, Milan, 1506 but it’s reimagined elements certainly bring us closer to the great man and one of his masterpieces.