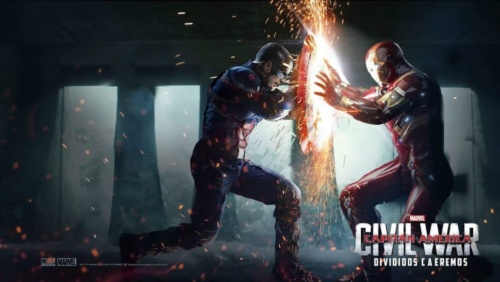 The Marvel Universe has brought us another blockbuster worth watching. This film is a great extension as a sequel to Captain America, as well as the Avengers, but can also stand by itself.

Civil War deals with the repercussions of Avengers: Age of Ultron where the Avengers caused a great deal of collateral damage and the death of civilians. The public as well as the United Nations want them registered and only in action by decree as for now they are wild running bunch of costumed vigilantes answerable to no one. Whilst Iron Man (Robert Downey Jr ) agrees to sign the document Captain America (Chris Evans) declines and as the plot thickens the rule abiding, usually boring Captain America becomes the outlaw. Meanwhile, Iron Man and the superheroes that stuck with him have been given a time frame to catch Captain America and the other outlaws.

The movie features the amount of characters usually reserved for the Avengers and has the longest running time up to date. Yet what they did better than in Age of Ultron was to make this massive assemble cast memorable. Each character has developed and had to take a stance either to stay with Steve Rogers or Tony Stark. Even the scenes featuring multiple characters in action, such as the action scenes, or scenes featuring exposition are very well coordinated and stay true to the characters and their development. This is something Marvel has done extremely well.

The assemble cast even features Spiderman, who couldn’t be included in the previous films as Sony owns the right to the franchise. Played by Tom Holland Spiderman steals the show and at one point even Captain’s shield leaving the audience craving for more. Finally, the Spiderman we have all been waiting for.

One of the highlights of the film was the epic battle scene at the airport: super heroes fighting super heroes, forgetting about the true villain Zemo, played by Daniel Brühl, who goes through great lengths, successfully gambling on coincidences to tear Captain and Iron Man even further apart. Whilst his friendship with Tony crumbles, Captain America really stands out by how far he is willing to go to save his old friend Bucky: his devotion is unparalleled.

What makes the movie interesting is that it portrays the human side of super heroes and not super heroes trying to be human. It’s darker connotations hit the nerve of our Zeitgeist and add realism to this fantasy that allows the audience to become more empathetic with the characters and their stories.

What this movie does brilliantly, however, is to set up the next phase of the Marvel Cinematic Universe (MCU). All in all, this movie is a great film to watch and let’s you wish 2018 were here sooner as that is when the next Avengers is released.

Captain America: Civil War is currently out across cinemas in UK.