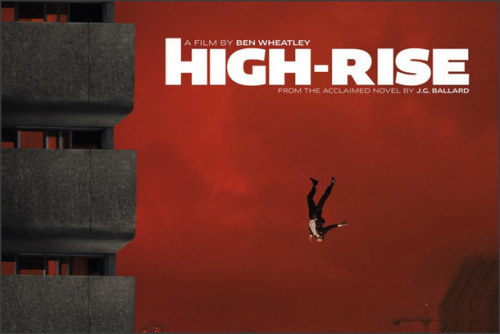 For those of you unfamiliar with the film’s theme it is based on J.G. Ballard’s 1975 novel of the same name which examines the disruptive emergence of a self contained society based in a high rise building. The tower block offers its residents lots of appealing features such as swimming pools, supermarkets and schools but you are led to believe this degree of social isolation is always likely to implode.

Even before the darkly surreal chaos begins and a round of quirky characters are introduced with the rapidity and violence of machine gunfire, there are already questions you want answered. Firstly, those residents look too well-heeled and middle class to be living in a high rise as ugly and nondescript as this. Unless of course it is set in a dystopian future where time has a habit of turning in on itself. Indeed, the hairstyles, moustaches and side burns indicate late 1960s perhaps 1970s (the original novel was written in 1975). Certainly, those old-fashioned TVs are also a 70s giveaway but  such obvious references are surely ironic.

The other question one asks is if the tower block represents social stratification then why are all the residents middle class? Yes there are lower, middle and upper strata of middle class but no outright oiks anywhere. Perhaps the high rise, in itself, is a symbol of affluence and exclusivity, which immediately cancels out all the have-nots.

This insane world of High Rise is seen through the eyes of doctor Robert Laing (Tom Hiddlestone) who is the personification of normality (for a while) in all its madness. He is soon seduced by Charlotte Melville played so convincingly by Sienna Miller, her questionable approach to morality an early taste of the dirty goings-on. Even at this early stage you feel that the innocent, respectable doc is going to have all the virtues olive-pressed out of him at some stage. And you are proved right. Particularly when by some unfortunate twist of fate he befriends his polar opposite, the bestial and angry Wilder who, despite his penchant for violence and social agitation, is just as Dr Laing describes him: “the sanest person in this place.”

It doesn’t take long for one to work out that this is a commentary on social stratification with Wilder representing the angry working class and Laing the confused but well-meaning middle-class centre. But even Laing learns his place in this social system. Invited to a party on the upper floors where everyone is dressed like 18th-century French royalty, he is laughed at, shuffled out the door and called a social climber. Subtle. Everything in this film is a melee of the surreal, brutish and bacchanal. You’re hardly given time to think. But that’s OK because all the information is deftly fed to you in a manner that makes it easy to remember.

You certainly won’t forget the architect of the building Anthony Royal (Jeremy Irons) revered as an almost Godlike, untouchable figure and with a wife who rides a white horse on the 44th floor as if it were the most normal thing in the world. Royal’s kingdom takes a nasty tumble when Wilder the movie’s Mr Nasty leads a rebellion of sorts. The lower floors are already angry at what they see as substandard housing services compared to the upper floors. Wilder stirs the discontent and gets beaten to a pulp for his pains.

One could argue that the authors of the book and auteur of the film are supporting neither, merely commenting on a microcosm of a fictional society. It is, however, a brave, frenetic piece of cinema which goes beyond feeding you an easy narrative. In some places it feels like a work of art, in others like showy, experimental theatre. Although not everyone’s cup of tea don’t be surprised if it wins a hatful of major awards by the end of the year.