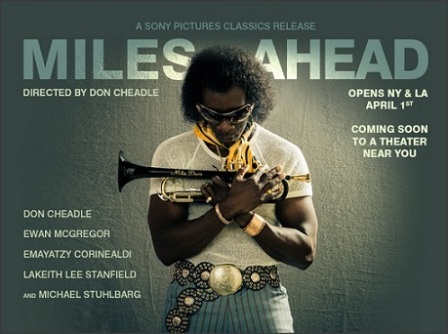 Review of: Miles Ahead (Film)

With actor Don Cheadle staking his reputation at the helm as director, producer, co-writer and also lead actor you can sense that this biopic of jazz musician Miles Davis is a project truly dear to his heart. It was also an opportunity too good to turn down, with Davis’ own family opting for him as their directorial choice. Cheadle’s early background as a musician before he found the big screen perhaps a vital asset in interpreting the complex creative drives of this great man.

And Cheadle does so with a growl. His voice reduced to a husky whisper to imitate the tones of one who has smoked way too many cigarettes or early in his career played in countless smoky bars on the Chitlin circuit. Perhaps he has just shouted at one hanger-on too many, as he does to an annoying Rolling Stone reporter, played by Ewan McGregor who doorsteps him, quite literally, to get a scoop on Davis’ come back after five years in the musical wilderness. The reporter also gets a smack in the eye for his impertinence.

But Cheadle and McGregor make a convincingly reckless and dogged tag team as Davis seeks to retrieve a reel of music that has been stolen from his house by a dodgy music producer who is fond of guns and hulking body guards. The actor/director has to be commended for marrying non-stop action with a script tighter than razor wire. These guys don’t sit still for a second and the classy but chaotic shenanigans are a metaphor for the wonderful music he has produced in his lifetime. A music that Davis refused to call jazz, deciding it was too limiting and instead relabelling it social music.

The elfin Emayatzy Corinealdi  in the role of Frances reminds one of a black Audrey Hepburn. Sophisticated and elegant she plays a professional dancer who pirouettes into Davis’s life, marries him and even gives up her dancing career – just for him. The full gamut of her acting skills are required to go from the Chopin loving creative soul who tiptoes through his episodic anarchy with the grace of a butterfly, to the angry wife lobbing wine bottles at her philandering husband’s head.

True Davis aficionados will cheer at the many boxing references. He was a big fan of the fight game and even had a punch bag in his lounge where he shows Rolling Stone reporter Dave Brill a few jabs and hooks. But the failure to mention his considerable painting talents in the same way is a curious omission since they played such a significant part in his creative life. Maybe it was not in keeping with the fast-paced, aggressive nature of the plot.

This is one for jazz-heads and movie lovers alike. The audience are permitted the odd smirk by Cheadle and McGregor’s light-hearted banter and you can rest assured they’ll take the opportunity wholeheartedly. The sniggers and stifled laughter come in all the right places and there’s no sense that it’s forced. It’s not all fun and games though, there’s nothing funny about Davis being beaten up by an uppity cop or shot at by music industry foes till he’s lying in a back alley bleeding and cowering for cover behind trash cans.

Expect this movie to be the career-defining project Cheadle hopes it will. Either via actors, director or more likely screenplay there are awards and plaudits coming its way. If you’ve recently seen lots of films that drag on seemingly for hours with you praying they’ll, end well this one is the opposite. When it ends it seems abrupt. There’s a desire for an encore, even though the jazz band filmed during the closing credits (featuring jazz great Herbie Hancock) do just that.

Miles Ahead released in cinemas across UK on 22 April.