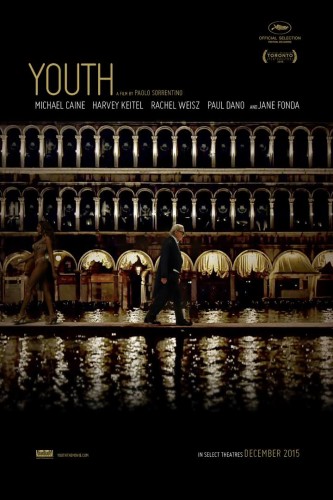 Quirky, yet philosophical, the film combines humour and high art all in one. Aesthetically reminiscent of Fellini’s 8½ director Sorrentino succeeds in creating a visually outstanding piece.

Youth is a remarkable motion picture, whose composition grasps your attention and delight. The film is about life, aging, time passing and our change in perspective as the years put distance between events in our lives, making them appear further and further away.

Michael Caine is a remarkable lead for the film. He plays the aging composer Fred Ballinger who is at a state of the art Swiss retreat to have his health checked. Meanwhile, the Queen’s Emissary Assistant asks him to play his Simple Song collection for her Majesty’s husbands’ birthday. He declines due to personal reasons. Caine gives a subtle performance: his character isn’t a fan of emotion, yet there is always more going on than meets the eye. He manages to capture the essence of this character and delivers him to the audience in a way that is as raw as reality.

With him at the resort are also several other people, including Mick Boyle (Harvey Keitel) Fred’s friend of 60 years. He is there to write a movie with some young assistant writers. Mick had a successful Hollywood career, but his last movies failed to meet the audiences’ expectations. Brenda Morel (Jane Fonda), the movie-diva who usually plays parts in his films flies down herself to inform him and decline the offer. Everything fades, not just one’s youth. Mick Boyle later suffers a nervous break down, beautifully staged by an array of women in an even wilder array of costumes spread across an alpine meadow.

The quirkiness derives from the smaller parts of the film. Fred’s daughter Lena’s husband leaves her to be with Paloma Faith, who plays herself. There is also a former football legend with a huge Karl Marx tattooed on his back and severe breathing problems due to his weight.

Jimmy Tree (Paul Dano) a Hollywood actor researching a new role often talks to Fred. He too has a unique view of life, which makes for good dialogue especially when he has found his take on the character he wants to play – no spoilers – so I will only say one of the best meta-jokes I have seen in a long time derives from it.

All in all, the film is fantastically composed – from the script, to the score, to the images and casting. It might not be The Great Beauty, it is however, still a treat. The images make one forget about these dull winter nights and the dialogue sheds some light on the human condition. Do yourself a favour and watch it.