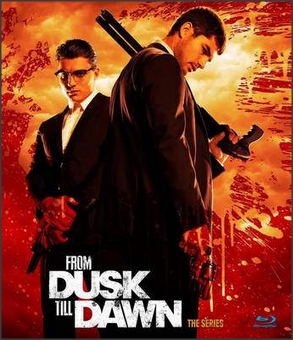 I’m an unabashed Tarantino and Robert Rodriguez fan and loved the first From Dusk Till Dawn movie but I must admit I’m not a fan of prequels, sequels and certainly have not been impressed with the majority of hit movie remakes. My long standing reluctance had turned this into a Netflix throwback Thursday in every sense of the word. But better late than never. So I didn’t hold out much hope for this new Rodriguez directed series, but hey we shouldn’t be so precious and was pleasantly surprised by this take on the 90s horror-crime, genre-twisting movie. It begins with that memorable ten-gallon hat bar room shoot-out and a hint of the vampires to come – enough to let you know there’s going to be a lot more going on in the genre-twisting department.

If you’ve never seen the original movie, the Gecko brothers are fleeing a bank job and are being tailed across the desert by Texas Rangers. They lay waste to these unfortunate lawmen but have a not so fortuitous run-in with a colony of vampires. The new Gecko brothers came across more like the Latino Krays and I prefer the charismatic, swaggering George Clooney as Seth Gecko and the off-key psychotic Tarantino as his brother Richie in the first movie. Here D.J. Cotrano (Seth) and Zane Holtz (Richie) are colder, suited and booted perhaps more believable villains but cannot match the unique blend of black comedy and danger that Clooney and Tarantino created. However, the new pair have to be applauded for not trying to imitate their predecessors and creating creepy, stand-out characters with no respect for superstar reputations.

Rodriguez’s touch can immediately be seen in the all-action tussles and love of desert cinematography. Not surprising since he is executive producer, writer of the teleplay and director. Miramax and Rodriguez’s own channel El Rey Network are the production forces behind the hit series. You’ll also notice touches of Rodriguez’s previous casting nods to actors who had their golden days in decades past. In the original movie he cast Michael Parks as Texas Ranger Earl McGraw and in this series he has Don Johnson in that role (the cop from 80s series Miami Vice).

A deal for season three was struck in October 2015 but actual film production only started two days ago, so my return to the Rodriguez fold is pretty timely. I actually wait with bated breath the airing of this next saga of the gunslinging, vampire killing Gecko Brothers.