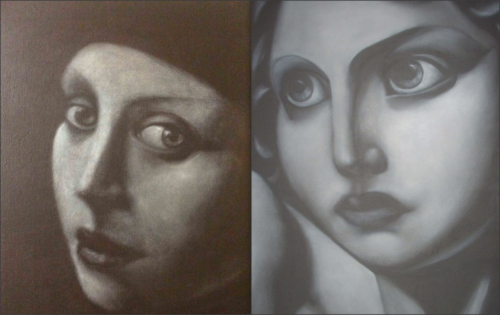 North London based artist Marcus Sprigen’s work caught many passing glances at the recent Islington Art and Design Fair. The similarity with the Dutch Master Vermeer in his displayed paintings was on further discussion not coincidental. His art is inspired from a wide-range of movements including Surrealism, Fantasy and elements of the dark psyche of artist Hieronymus Bosch but is also sourced from the subconscious in a style he describes as semi-automatism. This creative development has led him on a learning curve which even remarks as far back as the stone age art of our ancestors.

This journey kicked off in 2014 when a group exhibition he participated in at London’s West Bank Gallery drew him away from purely commercial graphic work and towards his own creative output. Psiberia, the graphics company he founded with a partner after graduating from Harrow Art School was where many of his clients were generated and so he was able to capitalise on these contacts when he freelanced to become a full time artist.

His oil paintings of six women titled Dark Deco are visually intriguing because of the proportions of the facial features, particularly the soulful eyes, moonlike faces and porcelain skin which brings to mind the aforementioned Vermeer’s Girl With The Pearl Earring and Polish artist Tamara de Lempicka. He took Vermeer’s masterpiece as his source point, using a black and white version of it in Photoshop as a reference for the painting to exact the tones he’d follow, working black to white, ensuring the background was totally blackened before adding whites for highlights and at all times mindful of his stylistic rhythms of spirals, contours and curves and a defined sense of movement.

The Dutch tradition of having a dark background to create volume in the highlighted foreground figure is similar to Marcus’ method of working black-to-white although here this is his own signature developed through years of perfecting the almost charcoal-like hues around the figure. Another aspect Marcus admits to admiring is the finely balanced nature of Vermeer’s painting and it’s an easily identified quality in Dark Deco.

He also shares Madonna’s respect for Art Deco artist Tamara de Lempicka, hence the title Dark Deco. Her glamorous image influenced the singer’s look in her Vogue video which also featured some de Lempicka paintings which Madonna owns. Notably, de Lempicka is recognised as the first woman artist to also be a glamourous star but Marcus has stripped away this star-studded element which the Polish painter had made a signature style in her own work. His approach is an introspective study where the absence of colour and context draws you into the purity of aesthetic essence.

Other parallels with de Lempicka are the ‘windows to the soul’ – eyes expressively disproportionate which render the viewer uncomfortably naked as they seem to read your most protected thoughts and fears as well as letting you in to hers. Those soulful eyes got the Girl With the Pearl Earring tagged as the Dutch Mona Lisa and are,indeed, a stand out feature in Marcus’ Dark Deco as well.

Some of his most significant works have been drawings but he also works in acrylics and oils. Moreover, he is working on an epic tome called Soul Scriptures which as well as art includes poems, mythology, dreams and tales of inter-dimensional travel all brought together in his own inimitable way and featuring his own brand of calligraphy and word invention. The skies the limit it seems for Marcus Sprigens on this creative journey.