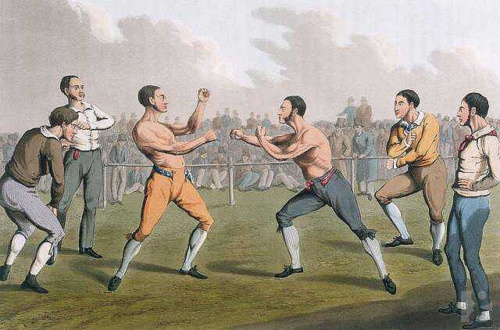 ON THIS DAY in 1743 English bare-knuckle fighter Jack Broughton began staging boxing exhibitions in an ampitheatre on Hanway Rd, near Oxford Street. It eventually became the largest of its kind, making him the foremost name in the sport. He cemented this status by drawing up seven rules, which became universally applied before the Marquis of Queensbury rules took over in the 1860s.

One of the rules stated that a fighting square should be chalked out so that fallen fighters had reference to where to stand before the fight and in case of knockdowns. Also a fallen fighter was given 30 seconds to get to his feet and make his way to a designated side of the chalked square. Boxers were banned from hitting each other when down or below the waist.

Broughton was backed by the powerful Duke of Cumberland, but this patronage came to an abrupt end when Broughton’s own pugilistic career was upended just as abruptly when he was beaten by Jack Slack in a professional bout. The Duke lost a fortune betting on Broughton and didn’t take the defeat lightly. Without his support Broughton’s ampitheatre went out of business but his pioneering efforts are remembered to this day and he has been inducted into the International Boxing Hall of fame.