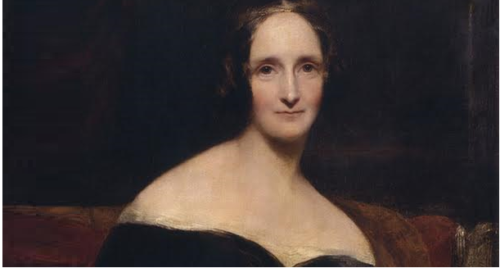 Born on this date in 1797 in Somers Town, London, Mary Shelley stepped from the shadows of her more renowned husband, father and mother to make her mark in literature with the tale of the gothic man-monster Frankenstein. She certainly drew from an inspiring literary circle. Her father was radical political philosopher William Godwin and her mother feminist writer and social activist Mary Wollstonecraft. Romantic poets Percy Shelley and his close friend Lord Byron would act as catalysts in her success but even before then she was doing the same for her husband, Shelley,  both promoting and editing his work.

Shelley came into her circle because he shared her father’s position on radical philosophy and intellectual literature. She fell in love with him while he was still married, much to her father’s displeasure, but her besotted love interest refused to back off. Forever fond of European travel, she set off with her new lover and her step sister Claire Clairmont, first landing in France but intent on a total European escapade.

She soon fell pregnant and married the poet in 1816 when his first wife Harriet committed suicide. Their early marriage years were much troubled and racked with issues which severely tested them, such as debt and wider opposition to their marriage. Scandal was never far off and close colleague Byron was an apt member of their literary circle in that respect, his numerous affairs attracting more than a hint of disrepute.

That enduring love of travel took the Shelleys, Lord Byron and Clair Clairmont to Geneva, Switzerland in the summer of 1816. To pass the time away on the long dark nights by the sea they formed an impromptu writing circle, challenging each to think up a scary story on the spot. Mary Shelley came up with Frankenstein and the rest is history. Not only did the novel become a literary classic but with the advent of cinema it claimed an unshakeable position in the annuls of cinematic horror.