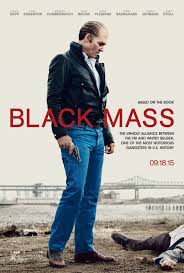 Black Mass reinstates Johnny Depp as one of the finest actors of our generation and puts him back on the map of serious actors after a few well-paid commercial disasters.

The story the Director Scott Cooper and screenplay writers Mark Mallouk and Jez Butterworth tell is the story of the rise and fall of South Boston Gangster Whitey Bulger who became a FBI informant and had the FBI take down his enemies within the Italian Mafia’s Boston branch.

Soon John Connolly (Joel Edgerton),the FBI agent who struck the deal with Bulger, becomes infatuated with the gangster life style and makes up obvious covers why the FBI should not prosecute Bulger. After a while these become repetitive and not believable anymore. This seems to have been the most obvious con in FBI history and yet no one tried to stop it for decades. This could have been portrayed with more finesse.

Whitey Bulger is a monster terrorising the streets of Boston. What little humanity he had at the beginning of the film, as seen in the love for his son and mother, are stripped away from him scene after scene after they die. He reaffirms to his victims that everything is alright as he kills them most brutally. Depp really made this character his own. The brilliance of this performance resides in its detail; the way he pronounces certain words, the micro expressions passing his face for a millisecond. It is nice to see his versatility in different characters than Jack Sparrow, although he is returning to some of his erstwhile characters with a new Pirates and a sequel to Alice in Wonderland coming out soon.

The story of Whitey Bulger is also told through flash backs via FBI interrogation videos of former White Hill Gang members, the gang Bulger led to notoriety. The director chose to rather tell than showparts of the story by doing that, yet this can be forgiven when considering the mass of detail Bulger’s life contains. The director and writers had no other option but to focus on the major events and collaborators of Bulger’s life-work.

The pace of the film is slow, broken up by acute violence: Bulger has no problems killing brutally and participating in several murders. The story adds to the canon of US Gangster films and many shots remind one of the 1970’s classics.

The score as well as the cinematography indicate that this film is a gangster horror story, which probably is a good way to approach a film about a character as brutal as Bulger was. All in all a film is worth a watch, but prepare to bring a clear head: the film requires attention, but you get a lot out of it in return.

Black Mass is currently being screened at cinemas across London and UK.