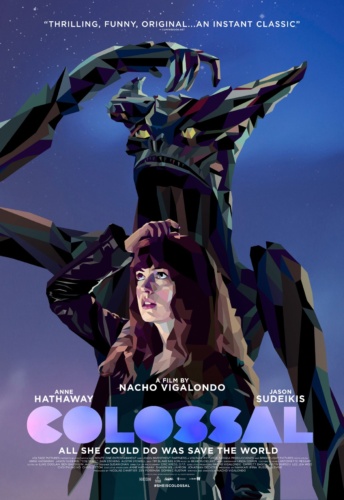 If you’ve ever wondered what else is left for monster movies when we’ve seen King Kong stomping through New York and Godzilla upending Japan, well the genre of the gigantic is turned on its head by a clever and darkly comical film called Colossal. It circumnavigates the blockbuster expectations of fifty-foot aliens, gorillas and lizards with a hilarious switch of form which has already wowed audiences at the Sundance Film Festival. It stars Anne Hathaway and she is also one of its executive producers so must have exercised a considerable amount of control over its wacky creative vision.

The lead character Gloria is thrown out of her boyfriend’s home because of her wild drinking and so returns to her Middle American hometown and hooks up with her bar owning childhood pal Oscar (Jason Sudeikis) who offers her a job serving customers. Once they realise a skyscraper-sized Kaiju monster is terrorising South Korea they also gradually become aware that they are both somehow responsible for its rampage.

Without giving too much away, the film makes no attempt to kid audiences that the monster is to be taken seriously – maybe that goes for the whole genre as well. In any case, it has all the hallmarks of some kind of genre send-up. Gloria has the monster performing silly dances in Seoul once she realises she can control its actions. Can you imagine King Kong breakdancing in Brooklyn or Godzilla twerking in Tokyo?

Good natured Oscar gradually reveals his true colours and appears to be something of a messed up guy whose disturbing characteristics grow more pronounced as their power over the monster becomes more evident. It may well be a metaphor for the abuses of public power – presidential or otherwise. But as you can guess, there’s always a karmic comeuppance for this misuse of dark forces.

This movie may be too off-key for those who prefer their monster movies served straight. However, the majority will agree it is a refreshing approach to an increasingly tired genre.  Previous monster movie flops have proved that these films if handled clumsily fail to suspend our already over-saturated cinematic imaginations. The best route is to take it one step further and drag the barely believable into the realms of the unashamedly ridiculous so that we can leave the cinema with smiles on our faces rather than shaking our heads.