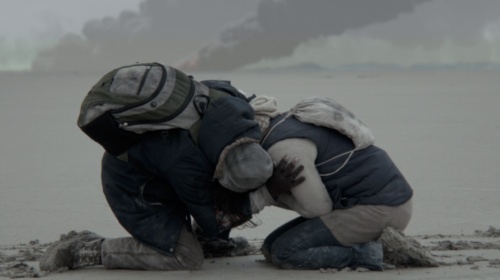 Sci-Fi London 2017 comes to Stratford Picturehouse with some five-star short and feature film debuts. Star Wars: Rogue One director Gareth Edwards got his break there in 2008, winning their 48-hour film competition with his ‘Factory Farmed’ short which had Hollywood knocking at his door. Rest assured, his position as director heir-apparent of sci-fi blockbusters is on unsteady ground considering this crop of talent.

Festival founder Louis Savy describes the genre as ‘ideal for exploring the human condition’ and this is certainly the case in Diverge. This post-apocalyptic feature is a deep, atmospheric character study of a global pandemic survivor facing his past, present and quantum future as he seeks a cure for his dying wife.

The opening wide shots of barren wastelands set the scene for the loneliness of their existence. The flowers he finds growing in the cracks of the tundra are a metaphor for the delicacy and fragility of their relationship, thriving, nonetheless, in a stony wilderness designed to break them. But these violets are more important than they first seem, for we later discover that this bearded Christ-like unidentified male is a former pharmaceutical researcher who has discovered compounds to cure his wife in their pulped stems and leaves. He is forced to become a reluctant messianic hero who starts out wanting to save his wife, dead child but ultimately the Earth itself.

American director James Morrison has it paced so slow and conservatively that the dialogue during the post-pandemic scenes are sparse enough to possibly warrant a silent movie rating. Nonetheless, the protagonist engages with his wife through gestural displays of concern and tenderness with the bitter winds of the wastelands rattling their tent with another persistent voice. This pacing is ideal for depicting those long, cold, empty days in the middle of nowhere.

It picks up during flashbacks of the couple’s life before the pandemic. Flashback is not the correct scientific term bearing in mind that quantum time travelling is central to the plot. But without giving away too many spoilers he has to return to a parallel universe and quite literally confront himself! A Russian quantum physicist tracking him through the wastelands sets him on this journey to tackle corrupt pharmaceutical companies who are more interested in profit than cures and ultimately save billions of lives.

This is not a typical post-apocalyptic wasteland movie despite the bleak, greyed out cinematography in those opening scenes. That merely sets the tone of a stark reversal of environment: juxtaposed as it is with a pre-Apocalyptic residential American suburb where much of the central action happens. Philosophical, poetic and one for the thinkers. You may find yourself still seated and trying to make sense of the future well after the credits roll. And that’s what all meaningful and powerful sci-fi movies should make you do.