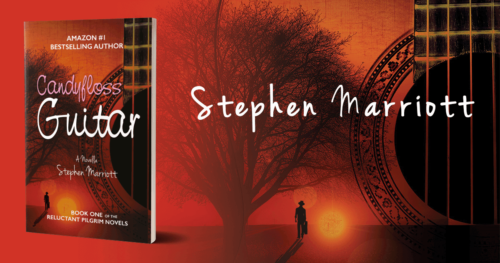 This novella by Stephen Marriott winds its way through rural Spain with the free-spirited, metaphysical air of a Paulo Coelho publication. There’s a strong sense of destiny and journey; an underlying message about finding yourself and your potential pervades. We know the main protagonist (indeed, all the characters) by his first name alone – Diego. His laid back existence living under the roof of his hard-working, candyfloss selling father, gets a much-needed awakening.

The ancient pilgrimage of Saint James takes backpackers through his home town of San Pedro, underscoring this message about life-affirming journeys of spiritual significance at every chance. Diego only heeds it when his father reaches his wit’s end and hands his son a rucksack and a guitar and sends the talented but unmotivated musician on his way with an ultimatum about finding one of two paths to his destiny – albeit one with no road back home.

The narrative is of a deliberately ambling and meandering nature, with Diego forming no lasting connections with any of the characters he encounters along the way, giving the sense of a traveller bumping into people and situations which either upend him or reset him on his path again but all essential components of this journey.

It’s refreshingly unattached to any restrictive conventions of story-structure and instead bathes you in the climes of North-West Spain and the relaxed and convivial community spirit of San Diego until you’re so immersed in the environment that story is no longer essential when you actually believe you are there feeling every moment, counting every step on that personal pilgrimage with the main character and take on his blissful ignorance of what the future may hold. This would be impossible for an author to achieve without first drawing us into his moment-to-moment, episode-to-episode world with such attention to sensory detail.

The only criticism is that even then there should be a significant ‘tah dah’ moment at the end. And there isn’t much of one. He reconciles himself with his dead father but perhaps a little too tidily for one with so much to gain, lose and learn on such a journey of truth.