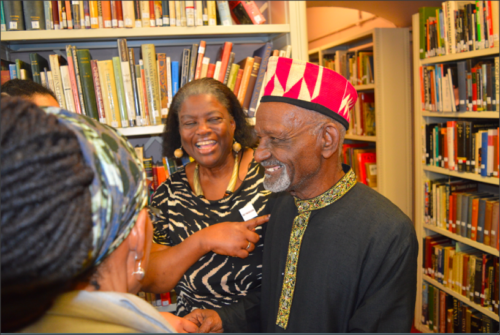 Ghanaian photographer James Barnor’s links with London span six decades from 1956 when he first set foot in the UK including the springboard 90s when he used London as his career base. His pioneering work, including coverage of Ghanaian independence and shots of boxing great Muhammad Ali, are the subject of his latest book Ever Young launched at Westminster Library, Leicester Square on May 12th.

The title of the book is taken from the name of his studios in Accra, Ghana. The journey to setting up this studio in the 1950s and becoming a photographer was one of hard work, talent and fortuitous meetings with individuals who would contribute to his growth. During his Q & A he shared how he was first noticed by an inspiring teacher who admired his talent as a flutist rather than a photographer. This mentor showcased his skills giving him the confidence to believe in his other creative abilities, later branching out and going on to forge close connections with the school magazine.

He also shared memories of how his big career break came when he snapped a shot of his toddler son carrying two beer bottles. This light-hearted snap set off a chain of unexpected events. A French photo agency which later bought this photo paid him well for it but also painted a pair of trousers on the image to cover his son’s modesty (there was no Photoshop back then.) The photo was also noticed by the Black Star Photo Agency who then commissioned him to cover Ghana’s push for independence.

The audience were treated to a projector slide-show of other photos dear to his heart, one of which was notable because it was the only one he hadn’t taken himself. It was a picture of him standing next to a statue of a lion at Kew Gardens on a visit to London in 1960. In 2015 he staged a reconstruction of that photo in the exact same pose but this time aged 85. The passage of time doing little to dampen his links with the UK and its capital.