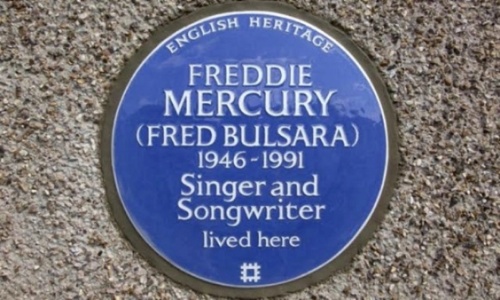 Flamboyant Queen lead singer Freddie Mercury (born Farrokh Bulsara) has been honoured with an English Heritage blue plaque on the walls of his childhood home in Feltham, West London. Band member Brian May and Mercury’s sister Kashmira Cooke addressed the media outside at 22 Gladstone Avenue sharing memories of his early years and beyond, when he went on to rock the world.

Born in Stone Town in Zanzibar, Tanzania, he fled with his family to this semi-detached West London home aged 17, when a revolution erupted after the British granted the region independence. His parents, Jer and Bomi Bulsara were Parsi Gujaratis from Bombay and the family surname comes from a village in southern Gujarat called Bulsar. Their journey across three continents led them to the UK in 1964.

Mercury’s Feltham neighbours recall his extravagant dress sense which included velvet flared trousers – which he made himself! Also, they shared fond memories of hearing him practising his guitar in his bedroom, with his sister also slipping in how he hogged the bathroom styling his rock-God hair. Few then would have predicted the astounding success and honours that awaited him.

From humble roots working as a warehouse worker and Heathrow Airport caterer, he later found creative vocation within his art studies at Ealing College which eventually paved the way to fully commit to the musicianship and stage pomp that would make him famous. His sister provided early hints of this rock and roll destiny to be: their shared love of Jimi Hendrix and Brian May dropping by the house and the two pals meticulously practising Hendrix riffs. The plaque is a timely memorial. It is Mercury’s birthday on September 5th.