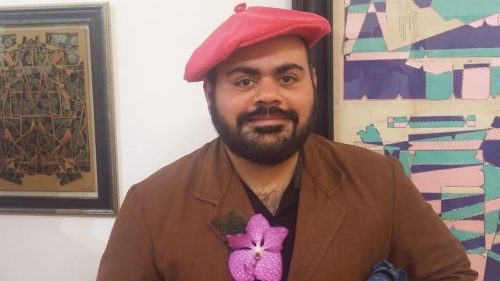 Saatchi Art-backed artist Hormazd Narielwalla’s Chelsea exhibition had a touch of the ‘Golden Child’ about it. With the art organisation’s chief curator Rebecca Wilson in attendance and champagne glasses being filled from a seemingly limitless supply you immediately got the sense you were in the presence of an unwrapped gem there in the Foundry Gallery. He features in Saatchi Art’s 2016 series of specially selected talents – those marked for success and already showing early signs. As far back as 2013 he was noted as ‘One to Watch’ by Saatchi Art online. A commendation he duly fulfilled by winning their Showdown Prize in 2014.

His path to this creative vocation is an interesting one. Starting off not in art but the fashion industry, as fortune would have it he crossed paths with British designer Paul Smith who advised him to ditch the threads and pick up the paints. After convincing him that his talents lay in the art world Smith backed up his words by sponsoring Narielwalla’s first show Study on Anansi in 2009. Now that’s what you call some heavyweight vote of confidence – first Paul Smith in your corner and then Saatchi Art!

Body Architecture, his second solo show, embraces his fashion roots with exploratory and confessional drives rather than mere tribute. These collage pieces sprung from tailoring patterns honour the raw craft of the fashion cutting business by using actual cutting room originals. The National Theatre actually donated a whole batch of such tailoring patterns, including those of actor  Benedict Cumberbatch. From this base he finds ironic geometry in the commonplace, functional and discarded.

Cubists such as Georges Braque (also a fellow collagist) may well share the fascination with hard lines and mathematical order but these are patterns with purpose. Or are they? You can still read the fashion cutters pencilled markings on the displayed work but now they are part of what catches the eye and this makes you ponder whether they are purely decorative or a stylistic statement. Perhaps both.

The influence of the East is hinted at in many of the paisley patterns and edgings. All gently woven into the fractured nature of the work but in stark contrast there are Maharaja depictions which are pretty unequivocal. The regal looking figure sitting on an elephant in Maharaja Entering His Darbar leaves you in no doubt about this cultural influence. Yes you could imagine an Indian emperor commissioning much of this and later a  21st century artist adding his post-modern stamp. There’s that nagging sense that this work is not of its time but in reality it shouts out ‘contemporary’. It’s a brave and vivid study of abstraction that doesn’t rest long enough on anything that limits its fields of expression.

Body Architecture is on view by appointment at the Foundry Gallery 39 Old Church Street, London, SW3 5BS until June 10, 2016