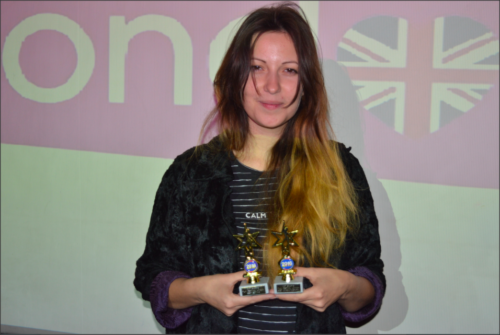 Director Elena Kovalenko was a double award winner at our own Hot Shorts Film Festival in October last year, triumphing in the editing and cinematography categories with her short film Underwater. We caught up with her to review her success and chat about her plans for 2017, including her new project Elemental Beauty.

1. Hi Elena, well done on your success at our film festival. Could you remind our readers how many awards you won at the Hot Shorts Film Festival 2016 and in what categories?

Hi, Eddie, thank you again for this amazing opportunity and for the awards. Underwater won two prizes at the Hot Shorts Film Festivals, one for Best Cinematography and the other for Best Video Editing.

2. Has the short film Underwater triumphed in other film festivals? How many has it been selected for now?

The film won the prize for the best experimental short film at the Los Angeles Cinema Festival of Hollywood and it was nominated for the best Music Video at London Golden Scout International Film Festival; it’s also been selected at the Orlando Film Festival and Voudoun Arto Film Festival, with the winners to be announced in 2017.

3. How did you create the concept for Underwater?

I set a goal for myself to complete at least one indie project per year. So when I first came to Dubai at the beginning of 2015 I really wanted to film something beautiful that also captured the vastness of the deserts and uniqueness of the spaces here. So I just started to write largely inspired by music, places and things I was experiencing at the time.  Underwater was actually based on a personal experience in dealing with a breakdown of a relationship. I guess his film was an expression of the emotions I was feeling at the time.

4. How did you get into film-making in the first place? What sparked your interest?

I was always interested in video, I used to always walk around with my camera and film little things that I would notice and found interesting. I was VJing in clubs at age 20 whilst studying chemistry/pharmacy at university, and after completing my Master degree, I attended the Odessa International Film Festival which was running for the first year (in 2010). After 8 days at the Festival I realized straight away that I wanted to be a filmmaker, everything else seemed to just fade away. At that point, I enrolled myself in film school and have never looked back.

5. What are your future plans as a writer/director?

I would really love to move onto bigger projects and start making feature films. In the meantime I’m still working on perfecting my art by producing, writing and directing short films (and other projects).

6. What project are you working on at the moment?

Recently I finished a Samsung short film contest which ran as part of the 13th Dubai International Film Festival. Samsung shortlisted 10 film-makers from UAE and asked to come up with an idea and produce a 5 min film within 20 days using only a Samsung Galaxy S7 Edge. Our film won first place, and as the main price I will fly and screen it at The Cannes Short Corner in May (2017).

I’m currently full time with Dubai Tourism but I still try stay active with my filmmaking and I have recently been working on an art fashion project called “Elemental Beauty”, which explores the four elements of nature. It will be finished by February 2017.

7. Will this project be available on public platforms so viewers can see it or is it client specific?

Yes. All of my projects are available online at website: linfiniproduction.com , but for obvious reasons they are not made public until they have screened at the film festivals (usually 12 months after).

8. How does the film-making scene in your home country differ from the UK?

I was living in London for about half a year and I found this place fascinating for indie filmmakers. Everyone is ready to collaborate.  It’s a bit difficult to talk about my home country, although I got started there, I never really had the opportunity to get into the local scene. I mainly developed whilst traveling around the world for 2 years and for the last two years I have been largely based in Dubai.

I’d like to add that the U.K. is still one of my favorite places in terms of art and architecture. Locations are always one of the main factors for my inspiration and I think U.K. is blessed with so many of them. As an example, I shot a music video in London in 2013 and was able to find a choreographer, dancers and a crew that were happy to collaborate on short notice, with little to no budget, simply for the sake of it. There are not many places in the world where this would happen.

9. What creative work, (a film or anything else) is your greatest inspiration? (but not something you have produced)

There are so many sources of inspiration, from beautiful places I’ve traveled to music, films and people I have meet. I don’t have any particular favorite films, but if I had to come up with a top 5 I would probably include: “Cafe de Floor”, “I Origins” “Knight of Cups” (or any movie of Terry Malick) “Savage planet (1973)”

10. What advice would you give anyone seeking to become a film-maker?

I think practice is the most important part in becoming a film-maker. If you want to become a film-maker and you’re just sitting at home and reading books about it – it’s probably not going to get you there. Filmmaking comes with the experience; staying curious and ultimately working hard at it. However, if it’s a passion and something you were meant to do, then it will never actually feel like “work”.

For me personally, I always enjoy every stage of the process in different ways and for different reasons. From inception, post-production, to seeing the idea come to life, it’s truly an incredible experience – like giving birth to an idea. But I also understand that to actually get a break, you do need to share your work, become an active part of the film making community, attend festivals and do the hard work behind the scenes also.

Hot Shorts Film Festival is an excellent example for instance. It was something that I wasn’t really expecting, the selection of the films was amazing, but I also had a great opportunity to meet other film-makers and people within the industry, I think this is also really important. So if there is anyone seeking to become a film-maker, I would highly recommend that they take that leap of faith and enter festivals – attend, collaborate, get active and don’t hesitate, just have to go for it and learn all the lessons along the way.