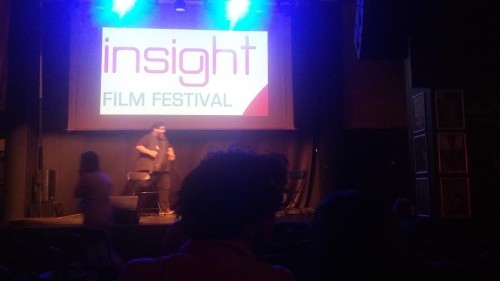 The woman’s perspective was forthrightly examined yesterday at the Insight Film Festival 2016, Rich Mix, Bethnal Green. All of the films were directed by and in many cases starred women. No two films were alike and in some one struggled to see the representation of the faith theme and in one or two the female perspective was also diluted. But that’s what made it such an unexpected package – from experimental films which felt they almost belonged in an art gallery to straight up dramas, it had it all. The Q&A with industry professionals such as Rachel Burns, an educationalist who works in the Jewish film community also pointed out these diffused representations and there were one or two differences of opinions up there on that stage.

And here’s a tuppence worth. Wading into the debate on the female perspective was Looking For Edward, a warm yet mysterious drama about a little girl’s fascination with a neighbour who is regarded as a witch by locals because she is a little strange. Harder work, because it represents the world through the eyes of both the little girl and her mother. Differing perspectives – innocence and the oxymoron of the mother’s unfettered, adventurous, warriorlike trust in her offspring and yet the captive wisdom of the nurturer, both in principled union.

And then there is the perspective of the eccentric old woman. Bear in mind a few hundred years ago any strange, doddery old hag was likely to be burned at the stake or ducked under water at the point of death or confession. This the male fear of the latent female ‘superpower’ perhaps. Notably, the mother in this tale chooses not to prejudge this woman her incense-lighting, book-burning practices. It’s handled impeccably by the director without the stereotype. There’s a part of you that’s half expecting the mother to march around to her flat with a hastily gathered neighbourhood posse bearing blazing torches. But it doesn’t happen. The morality of the old woman isn’t questioned only her in-the-moment existence as a human being is examined. No sense of fear as regards that relationship with her young daughter. Again is that the female gaze at work? Would a male director handled it differently and gone for the bloody jugular for effect?

Another that stood out as a favourite was the more ‘didactic’ Sea of Change. That’s how one of the Q&A panelist’s Rachel Burns (who claims to have been a teacher herself ) described it. It chooses a simple, moral tale to drive home its message. And you actually get it the first time. It’s about a teacher on her final day at a school before jetting off to Laos, South East Asia. She gets locked in the school and has a moment of reckoning with a mysterious black male holding the keys, and refusing to let her out, yet wishing her no harm. He makes her face the decisions of semesters past (Not too unlike Scrooge’s Ghost of Christmas Past but with a touch of the Bruce Almighties). Well yes, now you mention it, the ending was a little didactic and could have stretched the protagonist a bit more rather than let her leave with a self-satisfied smile on her face all questions answered. But again that’s perspective. The director here has sought to investigate the machinations of the human psyche rather than deal out clichéd end-of-film twists. You see it’s didactic but also unexpected. That’s quite a feat.