July 5th: Inauguration of the Shard 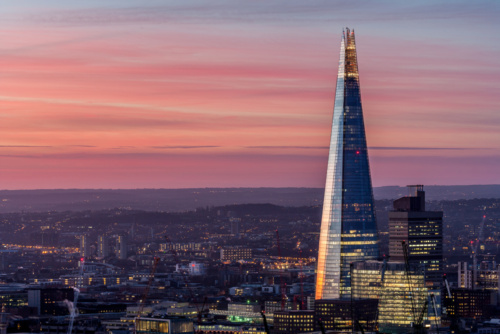 IT WAS on this day in 2012 that the 310 metre tall Shard Tower, located on the South Bank of the Thames, was officially inaugurated as one of Europe’s tallest buildings. It was opened by Prince Andrew and the Qatari Prime Minister, Sheikh Hamad Bin Jassim Bin Jabor Al Thani, whose nation provided most of the funding. As it stands, it is the UK’s tallest building, Europe’s fourth tallest and the world’s 111th.

The launch occurred during a 2012 of UK celebration, which included the London Olympics and the Queen Elizabeth II’s Diamond Jubilee. However, developer/joint owner Irving Sellar’s vision of magnificence along the Thames was at first unappealing to award-winning Italian architect Renzo Piano who didn’t believe big was always better. The doubters were soon won round.

Rumour has it that the architect drew a rough sketch of The Shard on a menu while having dinner with Sellar to discuss the proposal – and Sellar asked him to sign the menu as a contract. Construction began in March 2009 after Southwark Towers, which occupied the space, was demolished and it was completed in 2012 of the same month. Five years later its iconic glass pyramid shape is proving to be an eye-catching tourist attraction and an estimated 1 million people a year visit to stand in London’s highest public gallery and catch panoramic views of the capital.

It’s also home to the five-star Shangri-La Hotel and incorporates both commercial and residential occupancy. However, the most exclusive £50 million apartments in ‘Europe’s first vertical city’ remain unsold despite developers claims that it would take only 20 phone calls to shift them. This slow sell hasn’t put off developers Sellar Property Group in partnership with Qatar, as they have already announced plans for a sister tower alongside The Shard, which is currently being designed by the same architect. Although this time it will only be a little sister, 27 stories high.

Tagged with:     inauguration, The Shard