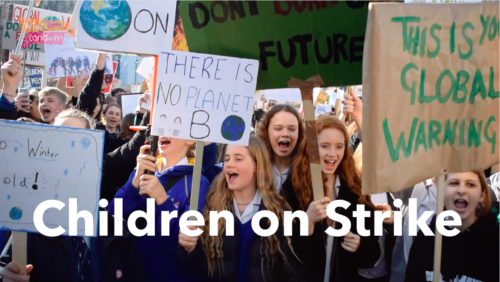 Today kids from schools across London descended on Parliament to protest about climate change. This was part of a UK wide strike taking place in over 50 cities across the country. Their main demand is that the government declare a ‘climate emergency’ and begin to inform the public about the seriousness of the issue.

The movement started with one 15-year-old’s protests in Sweden and has grown to included ten of thousands of children in Belgium, Germany and now the UK.

The main criticism of the movement is that it promotes truancy to school kids. Though there were undoubtedly some kids there simply for a day off, the majority were there for the right reasons and were committed and vocal in their convictions. So vocal in fact that they ended up taking over a bus in the middle of the road.

There was a real feeling that the children were being the adults in this situation. Asking politicians to put aside their petty squabbles over Brexit and instead focus on the looming and irreversible threat of climate change.

Whether the politicians decide to listen remains to be seen, but one thing is certain. Our future is in good hands.