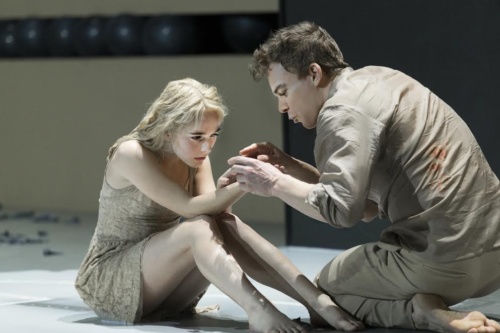 It’s almost a year since David Bowie made his final public appearance at the New York opening night of the Lazarus musical he co-wrote. Now playing through the autumn-winter season at the Kings Cross Theatre, Londoners have no excuse not to pay homage to one of rock’s greats in a production featuring many of his recognisable hits. Life on Mars, The Man Who Sold The World and Sound & Vision are all beautifully woven into this stage play which is presented as a sequel to Walter Tevis’ 1963 novel The Man Who Fell To Earth. Bowie fans will note their idol also starred in the book’s 1976 screen adaptation.

The show opens with the audience getting an introductory glimpse of the eight-piece band, placed as they are in aquarium-like cubicles behind the main actors. In the front stage the gin-swigging Major Thomas Jerome Newton is still quite stoic and detached despite his alcoholism and actor Michael C. Hall presents him as that interplanetary phenomenon, a careful mix of planet Anthea’s advanced civilisation and the mind altering, escapist pleasures of Earth. (if you’ve read the book you’ll know that Newton only discovers alcohol after he lands on Earth.)

The stunning film projections in the background shift from movie-like reproductions of what’s happening on stage to abstract visuals that enhance the developments of the piece. All of these futuristic yet glaringly retro clip sequences scream out the Aquarian, surreal, brilliance of Bowie well before a word is spoken. Director Ivo van Howe delivers magnificently here, meeting what is at face value an insurmountable challenge to do justice to the first musical by this rock god and achieving this by reproducing his energy in every department.

Without giving away too many spoilers there is an existential question at the heart of this production which materialises close to final curtain. Newton is an alien who cannot get back to his home planet and he meets the ghost of a woman (Sophia Anne Caruso) who has a slightly similar problem. Hers is the purgatory existence of the dead who cannot find neither heaven nor hell. Somehow Bowie’s much recognised fascination with the far future is embedded in this existential conflict. Perhaps one day it will be resolved by some clever physicist who shares his utopian/dystopian visions especially if he can prove that the two are somehow, somewhere aligned. Until then The Man Who Fell To Earth is stuck here but finds immortality in Lazarus. A curious title, because a man who cannot die has no reason to be awoken from the dead unlike the biblical tale the name comes from.

Lazarus runs at the Kings Cross Theatre until Jan 2017.