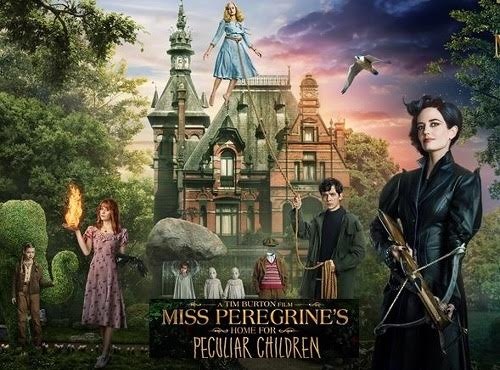 Director Tim Burton’s interpretation of American author Ransom Riggs’ debut novel has his distinctive gothic, offbeat flavour all over it, from Miss Peregrine’s raven-black take on the blue rinse all the way to the grotesque Hollows – monsters who’d look more at home in a horror movie than a children’s drama. Jake is a young boy growing up on his grandfather Abe’s fantastic tales about adventures that he claims to be true despite Jake’s father implying that the old man, played by Terence Stamp, is merely a storyteller in the most broad sense of the word.

When Jake finds his grandfather dead one evening with his eyes gouged out then elements of his ‘storytelling’ seem to have at least a hint of authenticity. His mission to find the truth takes him overseas to an orphanage in Wales where his grandfather was brought up after fleeing Poland as a child. This is where the ‘peculiar children’ with superpowers and their head mistress Miss Peregrine call home. The problem is it’s been uninhabited since 1943, when a German bomber took its roof off killing everyone inside. Or did it?

Actor Asa Butterfield portrays Jake as pale and curious, something of a loner but with enough likeability and sensitivity for us to engage. Even adults will suspend enough belief to partake his fantastical journey once a few of Jake’s tongue-in-cheek jokes at his own expense kick in. It’s not so funny for Jake, though, when a psychologist grows quite concerned about his state of mind following his grandfather’s death and his claims about ghostly figures around the corpse. His father agrees to take him on a trek to the orphanage to resolve these emotional issues and give him a holiday of sorts. That’s some holiday! A white-eyed, hatchet-handed Samuel L. Jackson, as the leader of the ghostly Hollows, is soon leading him on an unscheduled guided tour around hell itself!

The film intelligently tries to find a convenient niche between children’s entertainment and adult fare, although a seven year old with the strength of ten men and another a little older who has to wear lead boots so she doesn’t float away suggest this is firmly in the younger camp. Because of the fantastical nature of the children’s super powers there’s always a sense of wanting more, more, more! Let’s see what else they can do! This is no fault of the director, but merely because we are a generation built on cinematic excess and have been spoilt and over-saturated with the so-called ‘fantastical’. Instead, Tim Burton is patient and true to his vision in his build up and characterisation, and never loses sight of the fact that, when all is said and done, this is a film for the much younger viewer. And those of them not yet old enough to wear the ‘been there, done it, seen it’ Brownie badge.

Adults may find it a little drawn but they’re obviously caught in that compromising genre-loop we’ve been speaking about. One wonders how the book handles this problem. Oh and talking of loops the 1943 time loop the characters find themselves in gives the movie its delightful Ground Hog Day feel. Although Ground Hog Day could never be termed dark and whimsical. Here the Burton brand finds yet more unchartered territory in the imagery of childhood dreams and nightmares.