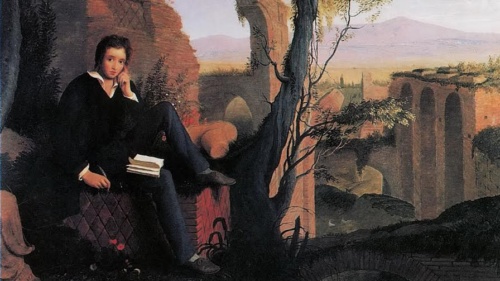 Born in Horsham, Sussex and educated at Eton, poet Percy Shelley’s links with London inevitably involved his tangled love life. And if you ever go boating on The Serpentine Lake, Hyde Park you’ll notice no heritage signs warning you of a tragic death in those watery depths. It happened two hundred years ago and is unremarkable only because historians associate any Shelley death linked with water to the poet’s own demise when his boat capsized off the coast of the Gulf of Spezia, Italy. This week on July 8th is the anniversary of Shelley’s death but his pregnant first wife Harriet Westbrook died right there in The Serpentine when she took her own life after he left her for another woman.

He lived the privileged life of an aristocrat but fought for social justice throughout those short years which was what drew him to his intellectual soulmate Mary Godwin, daughter of feminist author Mary Wollstonecraft and radical political philosopher William Godwin. He hung around their St Pancras home threatening to kill himself if she didn’t return his affections despite the fact he was already married to Harriet who had borne him a child, Elizabeth Ianthe. In fact Harriet was pregnant for a second time when she discovered his infidelity. William Godwin was displeased with this messy state of affairs involving his daughter but any attempt to end the relationship was met with Shelley’s suicide threats.

Godwin relented. Shelley didn’t take his own life. Harriet was less fortunate. She gave birth to his first son in autumn of 1814 but by this time knew his affections lay elsewhere. This was confirmed barely a year later when Mary Godwin fell pregnant for Shelley but lost the child. By 1816 she became the second woman after Harriet to bear him a son, which they named William. Harriet’s father, a successful coffee merchant had fumed at her relationship with Shelley ever since he had eloped with her to Scotland to get married when she was just sixteen. His protests unsurprisingly went off scale when he heard what Shelley had done this time but were unheard or ignored by the Shelley household. Only Harriet was in earshot of this angry exchange, caught between the crossfire since she made the decision to return to live with her father. But from that naïve teenager who wed Shelley to this unacceptable state of affairs that caused her immense distress she remained the innocent party.

She tried to move on from her husband and her father – moving out and beginning an ill-fated relationship with a military man who wouldn’t commit and left her pregnant. Such was the scandal of being in this condition out of wedlock she disappeared from the family fold to protect their reputations, setting up at Hans Place, Knightsbridge. The loneliness, rejection and despair at being shunned by society took hold. In November of 1816 she wrote a suicide note addressed to her husband, sister and father and took her own life in The Serpentine, Hyde Park. Her ‘husband’ Shelley would meet his own watery doom aged 29 when his schooner got dragged into a storm off the coast of Livorno, Italy. When his remains were found he was cremated right there on the beach with fellow poet Lord Byron in attendance. Legend has it that the pyre flames failed to burn Shelley’s heart so Byron rescued it and presented it to Mary Shelley who thereafter carried it around in a silk purse. Although buried in Rome he was given a memorial stone in Poets Corner, Westminster Abbey.

The inscription on his grave in Rome reads:

Nothing of him that doth fade

But doth suffer a sea-change

Into something rich and strange