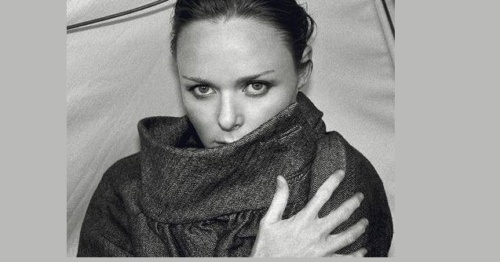 With London Fashion Week fast approaching on Sept 16th let’s sneak in some timely birthday greetings to British fashion designer Stella McCartney, who is 45 today. Although her parentage is pretty illustrious – daughter of ex-Beatle Paul McCartney and his wife American photographer/musician Linda – she made her name in this notoriously competitive industry where brand power is everything. Despite her privileged upbringing her down to earth father wanted her to live as normal a life as possible and made her attend a local state school rather than use his enormous wealth to go private.

Her career in fashion blossomed aged 16 when she worked as an intern for Christian Lacroix and later with Saville Row tailor Edward Sexton. However, high status connections ultimately count for a lot, as Sexton was her father’s own tailor and also she managed to rope in none other than Naomi Campbell to model the clothes for her graduate show. Yes you heard that right. Moreover, Naomi and Yasmin le Bon offered their services for free!

It wasn’t until 2001 that she branched out with her own fashion label, under the powerful support wing of the Gucci Group. Today her clothing line reaches 50 countries with prestigious retail spaces in fashion hot spots such as Rome, Paris, Barcelona Mayfair, Manhattan and Hollywood. And she hasn’t stopped there. She followed this up with her own perfume Stella and an organically sourced skincare line Care as well as being made Team GB’s Creative Director for the 2012 Olympics.

Following in the footsteps of her mother, who had a passionate concern for animals and the Earth, Stella constantly makes a stand against unethical and environmentally unsound practices such as animal testing and the use of furs.