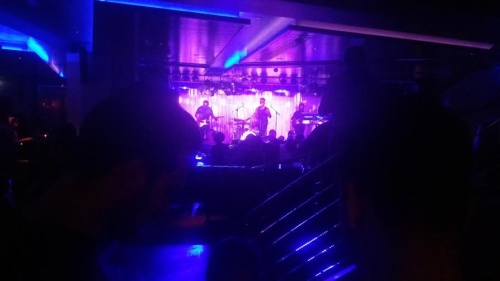 BRITISH SOUL STAR Omar widely known for his stand out 1992 rare-groove fusion hit There’s Nothing Like This took the stage at The Den, 100 Wardour Street with the crowd anxiously anticipating his appearance even while the musicians went through their tuning rituals. For many of his faithful fans memories of his 90s heyday signed to Giles Petersons’ Talkin Loud label were still clear in the mind but uncompromisingly reawaken with this mixture of new and old material. Back in 1992 Stevie Wonder apparently promised to write Omar a number one record, after hearing his hit. Few people realise Stevie Wonder lived up to the first part of this promise by producing the collaborative track Feeling You which forms part of Omar’s post 90s repertoire.

It was a patient and appreciative crowd who felt their way through the early part of his hour and a half set, no catcalling for his big hits, no leaping out of their seats but a sing-along vibe nonetheless. Tribute songs such as Roy Ayers ‘Everybody Loves The Sunshine’ and the Curtis Mayfield hit ‘Diamond in the Back’ eventually got the crowd on their feet in spite of the restaurant layout of the venue which had some in two minds whether to groove or just chill. Omar egged them on with some encouraging hand gestures and it suddenly became a dance floor – certainly the area closest to the stage.

When the big hit came it almost took the roof off. That familiar bassline took a few moments to register, probably because it was scheduled quite late in the set, but within a couple of bars it was singalong time again. There’s Nothing Like This may well have been the only line of the song some of his newer fans recognised but it served its purpose, uniting young and old in ecstatic refrain. You kind of got the feeling that this was a signal that the gig might be coming to an end but the crowd looked like they weren’t going anywhere! Omar was on hand to calm their fears, asking insistently: “Do you want more!” You can guess the reply. And for those who missed it or, indeed, wanted the night to last forever you can catch him again at Irlam Live 2016, Princes Park, Manchester June 4th performing with the British Collective of soul stars.