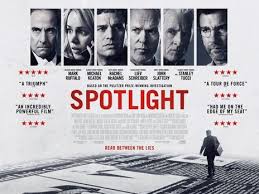 The film goes behind how journalists at the Globe uncovered an intense year-long scandal of child molestation within the Catholic Church and the consequential decade-long cover-up.

The film has been nominated for six Oscars at this years’ Academy Awards including Best Motion Picture, Best Director, Best Screenplay and Actor nominations for both Mark Ruffalo and Rachel McAdams.

The real story is based on Boston Globe’s Spotlight team, a division of journalists breaking investigative reports, consisting of Walter Robinson, Mike Rezendes, Sacha Pfeiffer and Matt Carroll. The team are assisted by newly-appointed news editor Marty Baron who believes this could be one of the biggest and most important stories the newspaper can uncover.

During filming, the majority of the journalists that are characterised in the film were actually on hand to be sure that the facts were being depicted correctly and that the actors’ portrayals of events were accurate.

The film manages to perfectly pick out the life and troubles of a journalist working for a major news publication. What toys up in their mind about morals and beliefs need to be put to the side line in the effort to get to the core of the story, and in a bid to tell it correctly.

The struggles of Rezendes’ life outside of the news story are ultimately put on hold for a story that not only could help to break down one of the biggest cover-ups in the Catholic Church but to also help to represent the victims and end similar abuse in the future. This can clearly be seen as representative to a trait that many writers and journalists would also have – a committal to the story. The film reads as a love letter to the craft and hard word that journalists go through.

The story takes place around 2011, before and after the events of 9/11, which show just how much of a problematic time it already was for such a story to be released. Most people out there are probably aware of the aftermath that the publication of the story caused.

The film correctly shows the passion, hard work and determination that any decent journalist needs to possess in order to do their job properly and also manages to show the deeply upsetting secrets that the Catholic Church held close to their chest for many years.

Spotlight is a deeply entertaining film, and definitely deserves the critical success it has achieved thus far. Going on the journey from the proposed story in the newsroom all the way through to the publication, which is full of many a twist and turn, is a very rewarding experience and helps us to understand just how important and crucial news can be – It’s great to realise how much of an impact a story can actually have on people, and sometimes, even the world.

Spotlight will be released in UK cinemas on 29th January.

Adam Maidment is a writer from Manchester, UK and works full-time in digital marketing. He's into all things geeky, including movies and playing on his PS4.