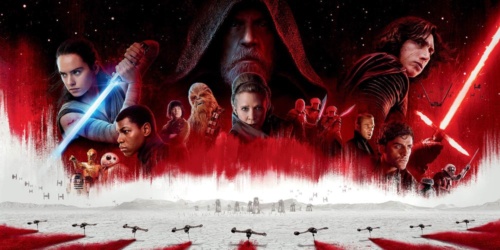 Whether you’re a Star Wars old timer who believes that there’s been nothing to touch A New Hope, The Empire Strikes Back and Return of the Jedi or a Gareth Edwards or J.J Abrams fan, you’ll soon agree on one thing – The Last Jedi has made the franchise a Force to be reckoned with again.

You’re probably expecting Rey (Daisy Ridley) and Kylo Ren (Adam Driver) to lock horns again but not with the twists and turns you’ll find in this episode. And that’s saying a lot from the saga which brought you the immortal line “Luke, I am your father.”

The First Order under the absolute command of Sith master Snoke are intent on wiping out the Resistance once and for all and you sense the Force can do little to oppose a dark side that has the already super-powerful Kylo Ren being mentored by a Snoke whose psychic powers are so superior that he chucks Rey around like a leaf in a hurricane. Snoke’s scarlet clad elite guard surrounding his throne, seem pretty redundant given his air of invincibility. Or so you are led to believe.

Salvation, perhaps lies with the intervention of another Jedi master, the older and wiser Luke Skywalker, but he seems reluctant to leave his island retreat to embark on a mission against the dark side even when Rey tracks him down. You’re constantly given a glimpse of Rey’s potential and sense she may take his place as the new hope even if he does turn down her pleas for help. Combined, they would make a formidable team against Snoke and Kylo Ren.

You can’t help but notice director Rian Johnson’s conscious efforts to fill this episode out – not with explosions and Star Wars clichés (although there are some of those) but the type of timely cliffhangers, revelations and sci-fi fairy tale adventure that has you on the edge of the seat. Not to mention new creature features such as crystal critters who look like alpine wolves dipped in Swarovski diamonds.

Some fans have argued that the franchise has looked a little too bloated lately. Playing safe with a self-selling franchise model with less risk taking and meaningful story telling. That argument died on Thursday December 14, the day it opened in the UK. An epic, entertaining 8th installment, which could arguably be the best of the lot. Only the pristine likes of Empire Strikes Back or A New Hope can match the high order stakes that are met here with Force.

Tagged with:     The Last Jedi