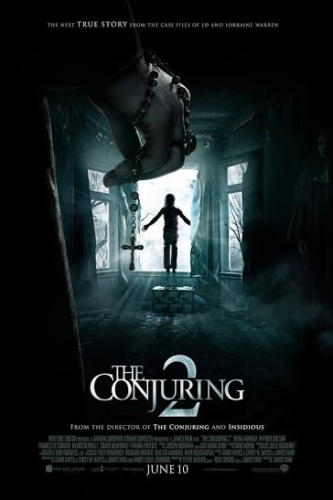 Review of: The Conjuring 2 (Film)

When was the last time you saw a British horror movie truly worth the ticket price, one that really made you jump when you least expected it? In fact make that ANY recent horror film. This creepy flick about a haunted flat in Enfield pushes all the right buttons because the American producers have done their homework right about the English way of life right down to the eerily authentic production design depicting Britain in 1977.

Following on from the successful The Conjuring 1 which grossed over £230 million worldwide, this movie again involves a couple investigating demonic possession. Ed Warren (Patrick Wilson) and and his wife Lorraine (Vera Farmiga), travel to England to sort out this Enfield spook having tired of media criticism back home in the USA. Patrick Wilson is becoming a bit of  a regular in these ghoulish screamers. Many of you might recognise him from Insidious where he starred as the father of a boy who is plagued by similar spirits. However, in The Conjuring 2 it is eleven year old Janet Hodgson who is the vessel for this unexplained evil.

You’re given a glimpse of the previous film in the opening scenes but are then swept to Enfield, 1977 and the familiar cackle of cockney accents in a North London playground. And be warned. That uncomfortable spark of familiarity in this known environment will suck you in and get you believing in the impossible and unimaginable even before the first ashen-faced ghoul squeals in your ear. There’s a lighter side, but not much. In the early scenes when Janet is caught in the playground with a cigarette and her stressed looking teacher first chastises her and then takes a sneaky puff you know that this horror is going to played out with a tinge of good old cockney mirth. But only the merest hint.

These dark goings on are triggered when Janet and her older sister lark about with an ouija board. Yes that’s been well over-used in this genre but here it serves its purpose as a convenient catalyst. They accidentally ‘awaken’ the 72 year old former tenant who died right there in his favourite chair only now he wants his chair and his house back! For some strange reason that scuffed and battered piece of furniture is still in the same corner of the house and Janet’s distraught mother’s explanations for not previously throwing it out are pretty unconvincing.

What is convincing is the superb production design. The drab, grubby council flat interior exaggerates the dire existence of an overworked working class mum burdened with four kids to feed, an absent father (who left her after he impregnated a neighbour with twins) and a pesky ghost to boot. Actually you can see why this ghost is so reluctant to leave. This dank abode with vile cooking grease visible on the outdated stoves and damp climbing up the walls looks like exactly the type of place any self-respecting ghost would want to live in.

It’s a roller-coaster of spine-tingling jump-scares and the first few times you’re spooked you’re caught by clever shadows in the child’s bedroom –  an innocent looking poster of Liverpool soccer star Kevin Keegan sporting a curly perm enough to scare anyone to death. Even the era-setting Starsky and Hutch posters bristle with latent menace because of the superb cinematography. Every room lit with dark intent and the sound design and music score timed perfectly to instill fear as such shadows loom ominously, despite the relative safety of your popcorn, hotdogs and back row seats.

The only gripe would be that, yes, it leads you on this journey of suspense then in one scene momentarily kills it dead. When police officers are called to the house to deal with the commotion they witness an unseen entity moving furniture around right before their eyes. Perhaps it would have been better to suspend belief – have the police officers doubt the sanity of the Hodgsons and leave them alone with their woes and terror. The police are such unshakeable symbols of fact-finding that there’s the danger that the film could have lost its punch from that moment on.

Despite this the film continues to up the ante and never again loses this feeling that doom awaits. Therefore it can be explained as a deliberate device to create a very public haunting which involves the press and TV news crews turning up on their doorstep along with geeky looking paranormal investigators. The plot development in key areas suggest that these scares have an element of being tongue in cheek. The way the mass media becomes involved, giving it front page sensationalism takes it away from the lonely, secluded horror movies we know so well. But this original slant is a plus point, as is the desire to avoid a cliched ending. You expect Ed Warren to die at the end, you really do. No spoilers here but maybe that’s a sign of a good screenwriter when they can give you what you want, take it away again and finish with something else.

The Conjuring 2 is currently out in cinemas across UK.