The Girl and the Box (Theatre) 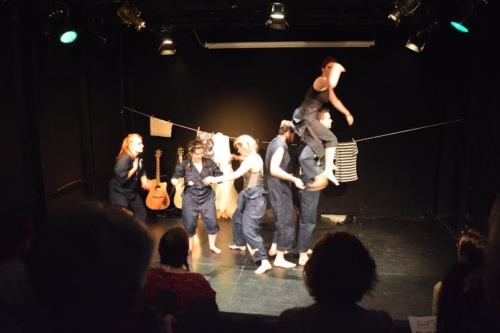 Review of: The Girl and the Box (Theatre)

Fabletop Theatre’s Girl and The Box tackles a problem as old as Man and Woman. What do we do with negative feelings such as depression, anger and fear that plague us in dark moments? Yes, we probably do shut them up in a box. But this playful yet deep ensemble piece has the lead character doing this literally and then when a mysterious stranger carts the box away she goes on a quest to get them back, realising that humans are only truly whole when they have both negative and positive emotions.

Currently on a run at the Etcetera Theatre for the Camden Fringe, it uses physical theatre, song, narration and their own take on puppetry to give power and gesture to the hero’s journey. Jess Neale plays the young girl who encounters unusual creatures along the way, such as a four-headed god, (wearing paint splattered workmen overalls), who challenges her with riddles and light-hearted philosophical chatter about the meaning of her quest.

There’s certainly something of the classic Greek hero’s quest about it. Hercules’ Seven Labours without the muscles or the punch -ups (although she’s spun in the air by these creatures a couple of times). Any dictionary will probably define a ‘hero’ as a person of great courage who faces great challenges and exploits designed to test their character. Someone whose destiny is marked by the gods (of the four headed kind here) Well this then is Hero. Her resolution of these issues should in no way be underplayed just because she is introspective and self-reflexive rather than holding a sabre to an ogre’s throat. In fact, the prior is probably more painful than the latter. For her of course!

There’s a charming, whimsical energy about the production with laughter never more than a line away. Tears too. Tears of laughter mainly, even though it is a play about our negative emotions. Which is a good thing. The last line will stay with you long after the final curtain. When Hero grows to understand that she actually needs those negative emotions unlocked from the box and put back into her consciousness she still asks “Why do these emotions hurt so much”. She’s simply told “It’s what makes us human.”

The Girl and the Box runs at The Etcetera Theatre, Camden until Aug 14.