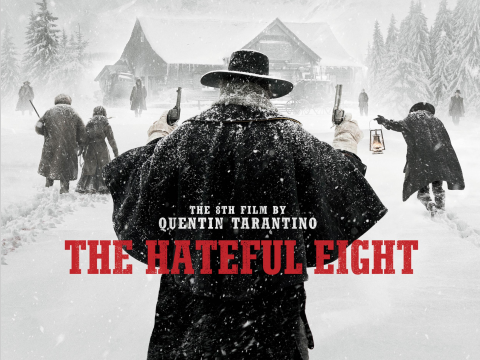 Review of: The Hateful Eight (Film)

A film that feels more like a play than a film, but with the special effects plays could never feature. The sets are minimal, a carriage and the interior of a wooden frontier hut. Not many directors can hold an audience’s attention for three hours with dialogue and blood alone, yet not many filmmakers write dialogue like Quentin Tarantino.

The film starts with Major Marquis Warren (Samuel L. Jackson) standing in the middle of an icy road accompanied by three frozen corpses. He stops a carriage, it’s John Ruth’s (Kurt Russel), he wants to travel in privacy, but he recognizes the Major and allows him to come aboard: an incipient blizzard threatens their lives. John Ruth, also known as the hangman, transports Daisy Domergue (Jennifer Jason Leigh) to the next town where she will be hung. The Major and him are both bounty hunters. The distrust between parties is immediately established: from the harsh characters to the harsh surroundings, nothing here is ideal, nor idyllic.

A third man, claiming to be the new sheriff of Red Rock Chris Mannix (Walton Goggins), also ends up in the carriage before they arrive at Minnie Haberdashery’s frontier lodge. Minnie, nor her husband are to be found. Instead a group of men have  taken refuge there from the storm, saying Minnie went to visit someone.

John Ruth checks them all out, one after the other, asking each if they had a problem with him transporting this woman to cash in on the bounty. They claim they do not have a problem with it, but Ruth is sure they are lying.

Mistrusts and twists and turns spread slowly through the branches of this story, like a slow acting poison that will kill you in time. Just wait, there ain’t no cure.

Hateful Eight features an intermission and whilst the first half is a build up for the story, the second half is the pay off for your patience. The films length and pacing are its advantage though: Tarantino utilized many story telling techniques to make the film more allegorical. The film is divided up into chapters, even an omniscient narrator at one point, explaining the story as a storyteller would in a novel.

The film can be perceived as a critique of the popular narration of the American dream: that everything is and was fine, work hard and you will make it. Nope. This country was founded on savagery winning the frontier for ‘civilization’ to finally enter. Here is how it was, not the romantic version. This forces one to draw a pessimistic parallel with modern times: people still shoot each other, racism and misogyny still exist. The frontier is still alive in many places in America, not just fictional Red Rock in Wyoming, and life is still lived on the edge of existence for many in a country torn by social inequalities. The film takes place a few years after the Civil War and the parties in the lodge are divided in North and South factions. Another reminder of America’s blood thirsty history, past and present.

Towards the end Channing Tatum appears as sort of main character, its through him that the story unravels, but hasn’t played out all the twists and turns yet. His appearance feels out of touch with the rest of the film though. His dress feels like a costume, not an extension of his character.

The score was superbly composed by Ennio Morricone, who has composed for Sergio Leone films (since the Dollars Triology) and worked on over 500 scores for film and television. He is understood to highlight tensions and wackiness alike.

The film was also shot on an Ultra Panavision 70 camera, a camera used in the 1950/60’s for horizon stretching Hollywood flicks such as Ben-Hur. Whilst the few ragged mountain landscapes that are in the film look fantastic most of the film is set inside a cabin. The format, however, sparked a commercial dispute over who can show the film’s 70mm film print: three major UK cinema chains have not received them: Picturehouse, Curzon and Cineworld.

All in all, the film is a very well-crafted composition. The story twists and turns many unexpected times. The violence arrives with a big bang when you don’t expect it and the gore galore unfolds.