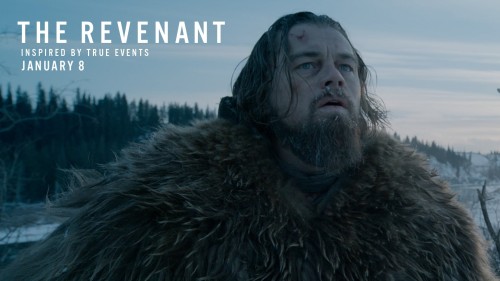 Review of: The Revenant (Film)

Could 2016 be the year that Leonardo DiCaprio finally wins an Oscar? Anyone who has seen his latest, The Revenant, seems to think he stands a very strong chance.

The Revenant, which translates roughly as someone who returns after death or a long absence, is DiCaprio’s first collaboration with notoriously-method director Alejandro Gonzales Inarritu, who comes hot off the heals from winning big at last years’ Oscars with ‘Birdman’.

The film is set in the 1820’s and initially follows a group of frontiersmen navigating through the rough wilderness of Louisiana in search for fur and pelts. Leonardo DiCaprio plays Hugh Glass, a fur trapper, who gets side-tracked into being viciously mauled and attacked by a wild bear. Fearing their own survival, his fellow frontiersmen leave him for dead in the cold and bitter weather unexpected that he’ll actually make it through the night. What follows is the ultimate battle for one mans’ survival being led on by his determination to get revenge from the men who left him to die.

Other stars to feature in the film include Tom Hardy, Domhnall Gleeson and Will Poulter who all put in excelling and compelling performances. Whilst DiCaprio and Hardy are fully deserving of the critical acclaim they are receiving for their roles – both having been just nominated for Best Actor and Best Supporting Actor at the Oscars – the real star of the show here is nature. Perhaps playing the role of the biggest villain of them all, it’s nature that Glass has to ultimately beat if he wants to survive.

The film was mostly filmed in Canada, however due to an over-complicated film shoot and the varying changes in weather, filming also had to take place in Argentina and the United States. Mexican cinematographer Emmanuel Lubezki manages to capture the intense and bitterly harsh beauty of these locations whether it’s in long landscape shots or whether we’re battling the snowstorms or choppy waterfalls ourselves – majorly contributing towards giving the audience a sense that they are having to combat the similar battle for survival alongside Glass. It’s also worth noting that, bar one scene, the film was entirely filmed using natural light which, once you see the film, may find particularly hard to believe.

During production, the cast and crew tackled many a hurdle themselves which seems relevant considering the film they were making. If anything, it probably helped to contribute towards setting the scene and ambience needed for such an intense film.

In conclusion, The Revenant is a film worthy of the acclaim it is receiving. Leonardo DiCaprio turns in a fully-committed performance and is entirely convincing in his struggles and woes. Tom Hardy also plays the compadre turned villain role effectively in one of his most fully rounded characters so far in his character. Both are deserving of their Oscar nominations, alongside Alejandro Gonzales Inarritu for his compelling direction.

Anyone going to see The Revenant should be prepared to go on an adventure like no other. It’s entirely exhausting, will take your breath away and perhaps even be hard-to-watch at some points. Just when you think Glass is making progress, something else comes round the corner and throws everything out. These reasons are exactly what helps to makes this such a tour-de-force of a film. It will affect you long after the credits roll and you won’t be able to help yourself to consider what you’d be able to accomplish if you were in Glass’ shoes with nothing else but revenge to steer you on. It’s not a film that will be easy to watch, but it’s certainly worth it.

The Revenant is now out in cinemas  nationwide and is one of the eight contenders battling it out for Best Motion Picture at the Oscars later this year.

Adam Maidment is a writer from Manchester, UK and works full-time in digital marketing. He's into all things geeky, including movies and playing on his PS4.