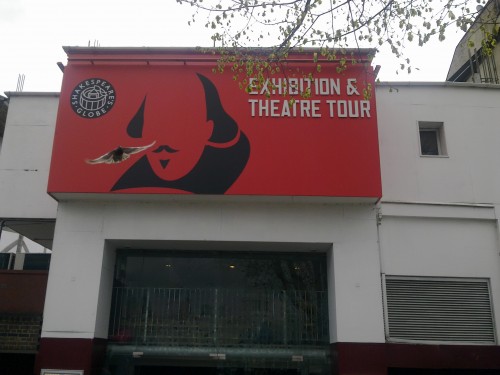 The Shakespeare Globe exhibition and theatre tour is an informative and engaging display of historical facts about Shakespeare’s professional home in London and the London of the Elizabethan times he lived in.

The museum whose entrance is from the Bankside is on the upper floor. The exhibition begins with a display of a timeline dating back to 16th century when many of Shakespeare’s famous works were printed and the playhouses for which they were written. 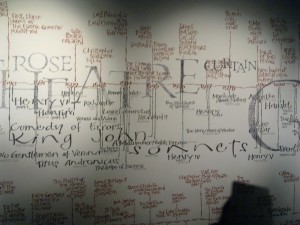 A timeline of Shakespeare’s works printed

Ironically, there does not seem to be any original preserves of Shakespeare’s writings and much of the transcripts of the plays written by him are a reproduction from the First Folio compiled by his theatre mates Condell & Herbert. It was also interesting to note that there were no roles played by women in the Elizabethan era and all female characters in Shakespeare’s plays were played by men!

Standing out distinctly amongst the many exhibits is a debatable transcript of a will believed to have been signed by Shakespeare. There is also an exhibit of some quotes from Shakespeare’s plays, a look back into the Shakespearean London  around the Globe at Bankside with some history and images of London Bridge, Tower of London, Southwark Cathedral, St Paul’s Cathedral, The Thames, The Borough market, and the Globe as they used to be all readable through an interactive touch screen device.

A feast in Bermondsey painting and a scale model of the Frost fair, a fair hosted when the Thames froze gives us a peek into the entertainment, festivals and revelry prevalent in the Shakespearean era. 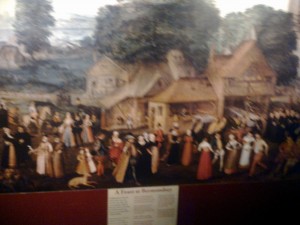 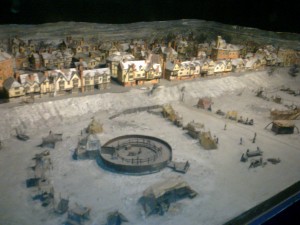 Everyday objects from Shakespeare’s time such as pots, spoons and so on form valuable artefacts.

There is also information about the Chamberlain’s Men, the acting company at The Globe and the other playhouse nearby at the Bankside, the Rose theatre.

At the next turn are the costumes and cosmetics exhibits with some interesting facts on the use of lye and the linen worn underneath the prickly corsets. The outfits of Queen Elizabeth and Cleopatra used in the plays are in regal display. 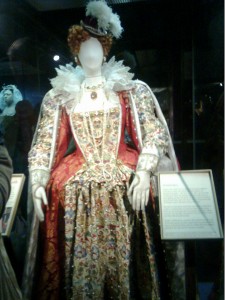 Next in line were the defense and armour clothing and instruments including swords and shields from the era used in plays. Also included were the musical instruments such as trumpets, shawns, sackbutts, cornetss prevalent in Elizabethan England and used in plays such as Twelfth Night. On the green wall are quotations about music from Shakespeare’s plays. 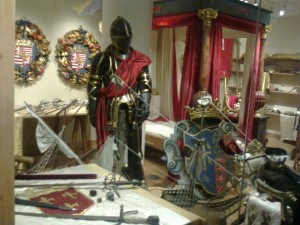 The last segment  is an exhibit on what the early years Globe looked like before it was destroyed by the fire caused by a loose canon during a play. Although rebuilt again, it was taken down during 1600s until an American actor-director living in Britain, Sam Wanamaker endeavored to rebuild a replica of the original version of the Globe over a twenty year period but unfortunately didn’t live to see the day when the current Globe was reopened in the early 90s. 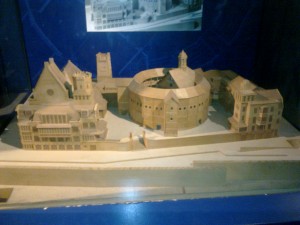 A scale model of the Globe

The Sam Wanamaker playhouse adjacent  is an indoor candle lit theatre accessed through the main foyer of the Globe that opened in early 2014 for performances.

The Globe also has pre and post dining facilities in the form of the Swan Bar and Restaurant spanning two floors with a panoramic view of the Thames and a Cafe Bar near the foyer. There is also a shop selling souvenirs, books and Shakespearean paraphernalia.

The Globe theatre is an open air replica of the original playhouse from 1599 and has seating spanned across the  upper, middle, lower gallery and a standing area at the  yard with ticket prices as low as £5 to watch the plays, a perfect  theatrical treat. 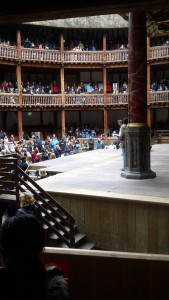 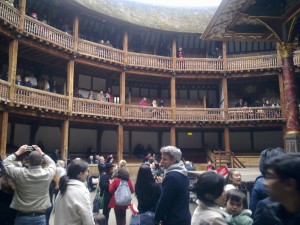 Three tiered gallery and the yards at the Globe theatre