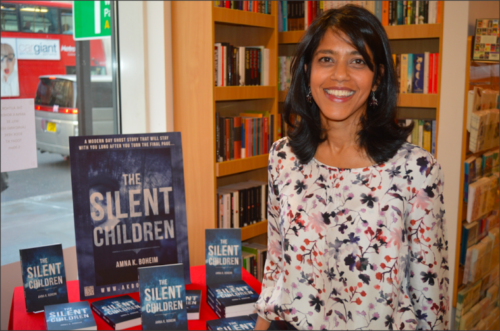 Author Amna K. Boheim shared many intriguing anecdotes about her debut novel The Silent Children during its May 5th launch at Alef Bookstores, Baker Street. Anyone who attended her ‘first chapter reading’ at Novel London back in February would have been familiar with her experiences of switching from investment banking to creative writing. Novel London are an organisation who provide a platform for new writers and at that particular event in Waterstones, Covent Garden one was made aware that bankers-turned-authors are more common than first thought. We were also informed that she intended to push on with the promotion of this her first book in the coming months. She kept her word. An enthused gathering of guests were in attendance and Amna seated next to her promotional copies gave another first chapter reading and afterwards invited Q & A questions.

Set in Austria’s historic and scenic capital of Vienna, this ghost story brings together a warring mother and son – but only on her death bed after she commits suicide. She writes a letter seeking to build bridges with him and requests that he help trace a mysterious person in a black and white photo she has kept since childhood. This triggers his return to the family fold and the examination of the many unfolding riddles harking back to her younger days. Inevitably, during the Q & A there were questions about whether any of the events or characters in the book related to her own life. Coming from the banking profession she shared her concerns about stereotypical views about bankers, pointing out a friend who proofread her manuscript advised her to make one of the banker characters more of a testosterone-driven, go-getter type. The author assured us that not all bankers were like that. Her approach certainly suggests a multi-layered, well-rounded writing style.

Her sure footing in literary pursuits has been recognised by other organisations. In 2014 she was The Literary Consultancy’s February 2014 Showcase Author. In that same year she was shortlisted for their 2014 Pen Factor Award. Notably, this plaudit came after they gave The Silent Children a manuscript assessment. A definite thumbs up for the book then. And if industry professionals are singing your praises then up is the only way to go.

The Silent Children by Amna K. Boheim is published by Troubador.