Wacky 90s Karaoke with a Difference – Hot Since 91 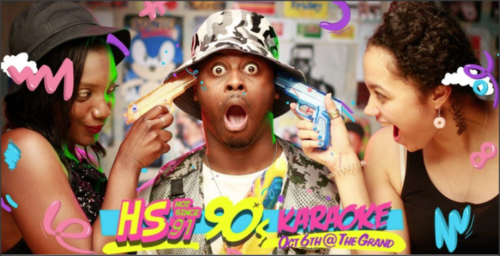 WHAT’S HOT LONDON? Magazine are always seeking out the hottest most happening events in the capital and the aptly named Hot Since 91 event planners have organised a 90s karaoke night that rejects the private karaoke booth shut-ins that have become the norm and instead turned things up a notch wilder.

Everyone attending has to dress in 90s camouflage kit and can expect free fried chicken, free candy floss, free face painting, giveaways, unannounced confetti drops, lots of inflatables – and that’s even before you get your hands on the karaoke track list. There are also 90s games such as Super Nintendo + N64 and PSI + Sega Mega Drive and a pop up photo booth with 90s memorabillia

Also the dance competitions and five DJs might further delay the would-be Mariahs and Biggie Smalls from the karaoke mics. There are 25 slots on the karaoke playlist and the emphasis will be 90s hiphop, RnB and pop. Also it’s free entry for anyone born in October.