Home  /  Features  /  The Dreamboys for the Lascivious Ladies of London

The Dreamboys for the Lascivious Ladies of London 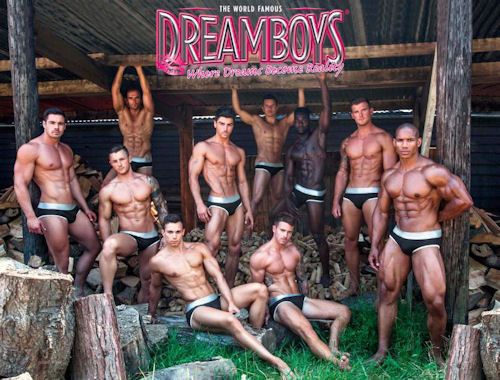 Review of: The Dreamboys Show

Girl’s  just wanna have fun. And how! We want men that resemble Greek Gods to strut their shredded, ripped muscles, gyrate and  shake their booties, tickle our senses with a strip tease and make us moan in an orgasmic delight as they bring us to a shattering climax with a Full Monty. Oh yes!

That’s female voyeurism at its very best. And catering to our voyeuristic needs is one such Male Strip show called the Dreamboys. Featured on X-factor, Britain’s Got Talent, The Only Way is Essex amongst others, the Dreamboys are at East End’s City Road in Shoreditch.

With a seating capacity of about 300 filled with mostly Hens/ Bachelorettes or Birthday gangs  surrounding the centre stage, the show begins with a hilarious Drag Queen who will humour you and have you in splits as she spins out a catchy rhyme that goes:

I don’t want no dirty socks
I wanna suck the big fat c0ck$.

Each act sure will have even the most prim n propah woman screaming or even creaming in her pants. And why not? Men have long since enjoyed female strip tease, cabarets, burlesque shows.  Have had so many options to sate their lust all this time. There has been no dearth of female nudity and men have often used this against us ‘regular’ women to make us insecure with their meandering ways. It’s time women let off some steam with live adult entertainment too!  Oh yeah we’d heard of Chippendales across the Atlantic in distant America many moons ago. But damn! We women in this cold English weather weren’t exactly spoiled for choices. We want R-rated entertainment too. And we are just as unabashed in seeking it. We want equality! We ain’t going to be left behind. What’s good for the goose is good for the gander.

Besides, we want to feel good. Real good. Especially if we have been dumped, are heart broken, separated, divorced,  single, depressed, shy or  have been cheated on.