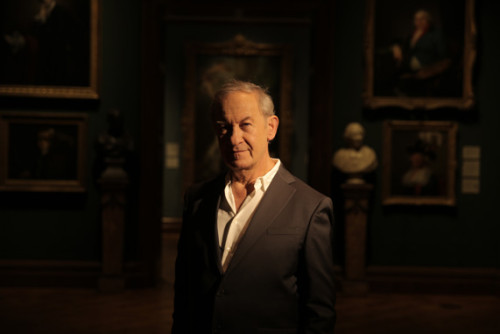 Review of: Face of Britain (Exhibition)

Historian Simon Schama’s five-part series of the same name was recently broadcast on BBC2 and this exhibition of portraiture featuring powerful figures from British history runs in conjunction with a similarly themed book. The exhibits are divided into Power, Love, Self, Fame and People and it is left up to the visitors to attach meaning to these (unless, of course, you take the late night guided tour where gentle discussion leads to a degree of clarification). Guided tour or not, the underlying question you’re asked to tackle is what unifying idea do these portraits express?

Winston Churchill’s indomitable presence is captured by the stark black and white photography of Yousuf Karsh. The black hues crushed an uncompromising jet black during darkroom processing, consume much out of the image but somehow still allow the formidable subject to command the foreground in spite or because of this. Britain’s most celebrated Prime Minister sits comfortably in the frame, all his fighting qualities enhanced by its simplicity and intensity. You could imagine him being rather proud about this statesman-like depiction but perhaps the same can’t be said of Graham Sutherland’s oil on canvas painting hanging alongside it – and for personal reasons not artistic ones.  Churchill couldn’t tell the photographer Karsh how to do his job but the World War PM was also an amateur painter and this is where he and Sutherland fell out.  It’s rumoured that he only committed to a few sittings before walking out leaving Sutherland with just the preliminary sketches to work from. He used these and some old photographs of the PM to produce the completed painting which shows a wearier, older man (which he probably was at that time). But it’s like looking at a painting of a chipped and cracked old statue of the statesman, the detail can’t be faulted, neither the dominant gold-hued highlights and accents, and much greens in the shadows compliment the palette but the bottom line is Churchill didn’t like it. You can see why. But the artist’s job isn’t to produce something the sitter will like. Portraiture, when done well, is an exercise in absolute expression. Cracks and all. This was done well.

Margaret Thatcher is another British PM rumoured to be meddlesome when it comes to official photos and paintings. I’m not sure what her contribution was in Rodrigo Moynihan’s 1983 oil on canvas painting of her because it is a gentle, pleasing depiction – a very human one – perhaps that was her intention. But no. We are told that she made Moynihan remove the more engaging blue background and replace it with a steely, grey one as if to underline her hard, uncompromising, conservative (with a small c) public persona, it’s an effective combination against the softer hues of her clothing and hair but the bottom line is the artist is robbed of free expression here. In his favour you can imagine any artist being a little nervous and overwhelmed painting someone of her stature and perhaps giving ground easily. Thatcher was again rumoured to be unhappy when photographer Helmet Newton asked her not to smile in her 1991 sitting. She claimed that it would make her look disagreeable but Newton held firm and maintained that models in his photos did not smile. She actually manages a sort of half smile. A nervous, cautious one. Bearing in mind that this was taken just after she stepped down from office having been ousted by party colleagues, it perhaps captures her insecurity, a little unsure of herself, her future, even her legacy in this transitional period. It’s a clever inclusion in the Power themed room because we expect Thatcher to have pride of place in such a room – just not with a nervous half-smile.

Elizabeth I obviously had no such qualms about being depicted looking too ‘disagreeable’ because in this grand, monolithic painting by Marcus Gheeraerts she looks just that. And doesn’t smile. Deathly pale, frighteningly regal and powerful in a stiff, card-like white dress. In fact stiff is the right word to describe the whole painting, but it works as a depiction. We like to think of this period of British history and monarchy as being rather fixed and prudish anyway. Much symbolism alluding to the divine right of kings to rule, we know our place when at her feet (quite literally) lies Britain (shown as a map she is standing on) and at her head grey skies and thunder. Doesn’t sound like someone too concerned about issues of agreeableness.

Elizabeth II, Britain’s serving monarch, is captured as a sort of hologram in Lightness of Being. An almost three-dimension effect has been created by photographer Chris Levine by using numerous photos of the same shot and lenticular technology. The Queen wasn’t asked to close her eyes as the multi-layered photo was taken, she was merely resting them between takes and Levine seized the opportunity and captured the moment. And that’s quite a moment!