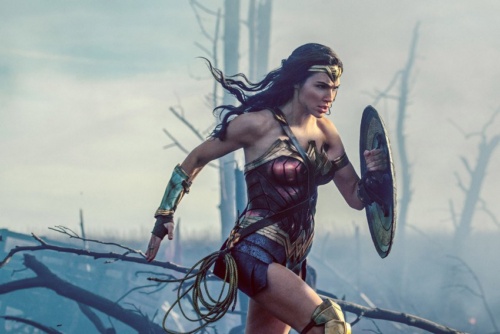 MANY FANS of the cult 1970s Wonder Woman series were praying against a remake that would harm the pristine memory of former Miss World USA Lynda Carter. In reality, the 2017 version would face little competition in the stunt and special effects departments. Dealing with the Carter-effect is another matter. The most effective way to answer all questions is to deliver a better plot and all round story and the wafer-thin plots of the 70s series would become a long distant memory regardless of Carter’s prowess with that signature spin.

American director Patricia Jenkins used the Amazon mythology of Wonder Woman ‘s origins to create a nation of strong female characters including Gal Gadot in the lead role. With a woman at the helm this was a production that catered for the mass market while unhindered by Hollywood’s obsession with the male cinematic gaze. The film opened with scenes of the infant Diana being brought up on the island of Themiscyra by her mother Queen Hippolyta (Connie Nielsen) and trained by her aunt Antiope (Robin Wright) who as general of the army is determined to act as Diana’s military mentor. The siblings have different ideas about Diana’s battlefield training with Hippolyta protective about her daughter while her sister believing her destiny as a warrior queen is inevitable.

There’s a saying ‘Some are born great and some have greatness thrust upon them.’ Diana qualifies in both cases. She has few options when World War 1 pilot Steve Pilot (Chris Pine) somehow crosses into her mythological realm and becomes submerged in the surrounding seas. German fighter planes in pursuit engage the Amazonians in battle with casualties on both sides. The impressive martial arts-style combat stunts here are acrobatic enough to draw comparisons with The Matrix.

It’s at this point Diana realises her world isn’t the peaceful, orderly, women-dominated place she believed it to be – particularly since it’s her first encounter with men and an aggressive one at that. Aware that a military conflict on a global scale is unfolding, she suspects the God Ares is responsible and sees it as her duty to return to the war front to help defeat his forces. You get an inkling that the German forces are going to get a super-hero style ass-kicking at some point and are not shocked when, in one of the most action-packed scenes in the movie, she does just that, single-handedly liberating trench-locked Belgian forces in the process and with not a super-hero hair out of place.

All efforts to flesh out the movie with a compelling backstory rather than rely on special effects and skyscraper leaping punch-ups pay off in the final third of the movie where you’re still engaged in her epic journey to unseat Ares in the battle of the Gods. And you remain so until the end, regardless of whether you’re a ten-year-old kid who has never seen the 70s Wonder Woman or a pensioner who bought that first DC comic in 1941 which had her sporting the trademark DC blue-black hair that even coloured Superman’s locks but in either case never became a big screen look. And on that note, definitely one for all the family.