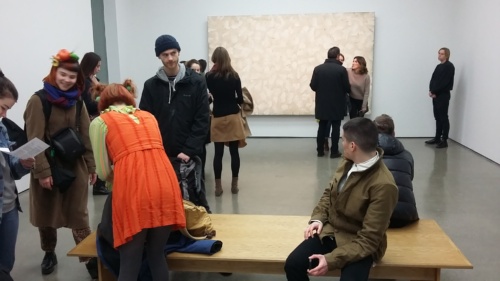 When art critic John Ruskin saw an exhibition of American artist Whistler’s abstract paintings at the Grosvenor Gallery in 1877 he so disliked the work he accused him of ‘flinging a pot of paint in the face of the public’. And if that paint was Dulux White and you accidentally stepped in it, the footprints and gathered splodges left by your sports shoes would look not unlike several of the paintings in this second exhibition by Park Seo-Bo at the White Cube.

Abstract art sometimes has this effect on us. The immediate gut level reaction doesn’t necessarily compliment the painstaking methods. Park’s Ecriture series (otherwise known as zigzag paintings) sprung from the Taoist and Buddhist philosophy of his Eastern roots and involve intricate preparation processes that are not incongruous with this spiritual base. But at first glance you wouldn’t necessarily get this.

The surface of his canvases are covered in hanji – a hand-made Korean paper made from Mulberry bark. And again, one would not grasp the importance of his working materials without foreknowledge of its use as flooring in Korean houses and how this shaped his own perspective on the world. This impacts the creative forces which drove every pencil line and smoothed every welled area of paint.

It’s interesting to learn that he soaks this hanji paper in a natural paint made from crushed seashells and the repeated ‘treadmarks’ are produced by scraping the still wet paper with bamboo sticks and fluted lead sticks. It’s the attention to detail of a very conscientious artist but the result can still leave one cold.

There’s something about their monochromatic nature, especially the steely greys, that standardise them and have you unable to dislike them but unsure whether they’ll ever make your 2018 top ten list. For greater appreciation here it pays to be noteful. Again, the pressing processes of calligraphy are a mystery to the uninitiated, however, when used in his work are certainly insightful.

Mostly monochromatic, the paintings cannot be seen to be endowed with the colour healing capabilities that we are asked to look for. Although one has to agree with his general point that: “Colour, which is organic, can be used as a tool for healing.” Few current exhibitions can match the insightfulness of his idea base but there is a danger that all this craft and method can be lost on both the unwizened and the obtuse amongst us.