Home  /  Books, Highlights  /  5 Books You Should Probably Buy After Reading Just the Blurb

5 Books You Should Probably Buy After Reading Just the Blurb 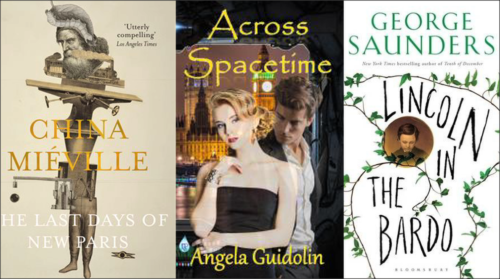 Latest figures show that the UK publishes more books per capita than any other country. With that much product on offer, you’ll probably find that while browsing in WHSmiths it’s inevitably the short description on the back cover which sells new publications to us. Well have you ever read a crazy, intriguing, out-of-the-ordinary book blurb that caught the eye within a few sentences and had you thinking….er..wow must read that just to get my head round it? Well here’s a list of five new novels with brilliant, unusual, must-read themes.

Lincoln in the Bardo (George Saunders)
Currently topping the London and New York best sellers lists, this curiously titled novel probably sells itself by the time you’ve read the synopsis. Author George Saunders takes the American Civil War as his backdrop with President Lincoln tending to a gravely sick son who soon dies. But this is not conventional historical fiction nor is statesman Lincoln the main protagonist – his dead son is. Willie Lincoln hasn’t moved on to heaven, hell, reincarnation or whatever afterlife expected according to religious faith, instead, he is caught in a transitional realm which the Tibetans call the Bardo where his soul’s journey encounters supernatural challenges. Recently announced Man Booker Prize winner George Saunders will be signing copies of his book at Foyles today (Oct 19) at a ticketed literary event 7-8pm.

The Last Days of New Paris (China Mieville)
The Nazis control the Paris streets in 1950 in this alternative take on World War 2 but a clandestine group of surrealist (Andre Breton included) are set to unleash their dream-like, hallucinogenic retribution. Bombs and bullets alone cannot defeat the enemy but when surrealist works of art come to life and walk the streets of Paris, a new war front is unexpectedly opened. Disciples of Aleister Crowley form a surrealist resistance with Breton and his followers to channel their efforts in a startling new weapon – an electric box which harnesses all their magic.

Children of a New World (Alexander Weinstein)
A creator of virtual memories struggles to distinguish real-life experience from manufactured events. A childless couple conceive two children in an online world, only for their imagined life to be infected by a computer virus. The robotic brother of an adopted Chinese child ‘dies’, and a family realises how real a son he had become. This debut story collection by Alexander Weinstein sources the rapidly increasing digital and online technology of the 21st Century for inspiration but takes it kicking and screaming into a Brave New Future.

Companions of Clay (Safeena Chaudhry)
Rafiq Rahman lies in intensive care still in a coma after a traffic accident. In his head he relives the traumatic events that have brought him to this point and his fragile relationship with estranged family members. Unable to enter heaven or hell, he exists in a surreal dream state where he can also enter the dreams of others or ghost around them during the day. And these same family members are the focus for this invisible stalking along with acquaintances who figured in key episodes of his life. However, it is his encounter with spiritual beings in the between-state realm and the grotesque and surreal transformation of his own physical form which proves telling in a fight to understand the transitory worlds of the dead and the living. Safeena Chaudrey’s debut novel features a gay, British-Pakistani male whose gender and racial identity are ultimately central to this spiritual journey.

Across Spacetime (Angela Guidolin)
It’s the year 2651 and humans have colonised the solar system and use the space continuum for research purposes. Angela Guidolin’s debut novel is a Romeo and Juliet across the multiverse as Mars resident Samir time travels to London in 1990 as a research student but crosses paths with Beatrice from the outer planetary systems. A romance develops as they navigate the mathematics of the continuum in the same way you or I might thumb through a work’s calendar and pencil in a holiday in the Med. But with their backgrounds light years apart these differences inevitably figure in the relationship. The book’s official launch is March 31st 2017.