Artists Painting London: How Matisse & the Fauves Brightened Up the Capital 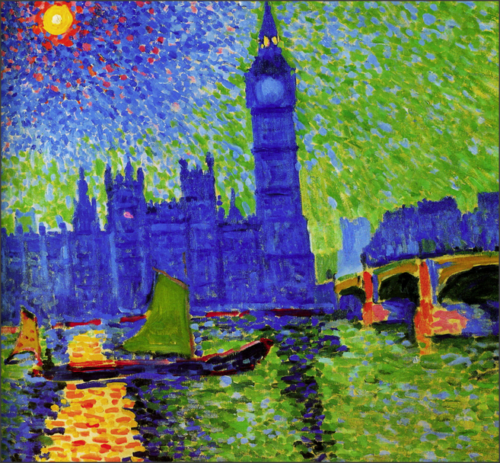 When the Fauve artists emerged in 1905, led by Matisse himself and creative ally Andre Derain, their paintings would have been pretty OTT by standards of the day to be noted for their vivid, jarring hues. Especially when you consider that around the same period the Expressionist work of Kandinsky and Kirchner were not exactly shy and retiring in the palette department and even before that Vincent Van Gogh, Gauguin and Cezanne were piling on the primary colours in their groundbreaking masterpieces.

However, Matisse and Derain took this to a new level and it became their committed manifesto. They made a point of using colour as a mood element rather than applying it realistically as nature intended. Not much difference than the expressive use of colour used by the Expressionists? The art critics of the day would have disagreed and one Louis Vauxcelles went as far as to describe this Matisse-led group of artists as wild beasts (Fauves) when he saw the degree of intensity in their palettes. However, the Fauve manifesto was not without a heavy dose of Expressionism, as Fauve mentor and tutor Symbolist artist Gustave Moreau taught them emotional response and expression trumps realistic representation.

Taking this advice as a rule, Matisse abandoned the practice a of mixing down primary colours and instead squeezed them directly onto the canvas. Around this time he began sharing a studio in Paris with kindred creative soul Andre Derain. They developed their new style at another shared studio in the fishing port of Couilloire in southern France but it was Derain who later used this new technique to paint some of London’s most recognizable landmarks. In 1906 he painted Charing Cross Bridge with bright green Houses of Parliament in the background. The River Thames (at least in part) is yellow with boats moored on a red bank running under the bridge.

His Big Ben painted in the same year is subdued by Fauve standards although he again makes no attempt at a realistic depiction. This and his six views of Tower Bridge were part of 30 paintings of London he completed during this three month stay commissioned by art dealer Ambroise Vollard. Vollard had fallen in love with the colourist aesthetic and had been an avid patron of Gauguin and Cezanne before him. Notably, Derain’s paintings of these landmarks in the capital were the most significant since Monet and were a remarkable departure from the style of his predecessor – even though he set up his easel to capture the same area of the Thames as Monet back in 1904.

Vollard must have been pleased with his effort, because on Derain’s return he bought them all. However, even though art history has judged the Monet and Whistler London paintings more worthy of celebration, Derain is more than just an art footnote. If the Impressionists were celebrated for using vivid colours and unrefined brushstrokes to capture the intensity of the sunshine and hues of the Mediterranean, it’s pretty significant that Derain used an evolution of that same approach and even brighter colours to paint greyer, cloudier London.

“Painting is too beautiful to be reduced to images which may be compared with those of a dog or horse. It is imperative that we escape the circle in which the realists have trapped us.” – Andre Derain

Catch Matisse in The Studio Royal Academy of Arts, until Nov 12.