A Duel of the Museums: Jack the Ripper Museum vs East End Women’s Museum 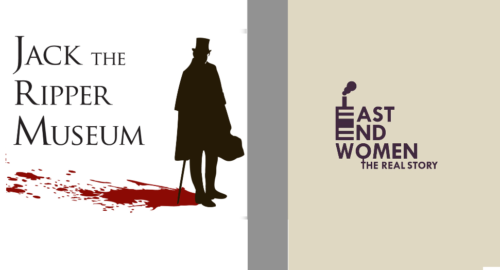 An East End duel between The Jack the Ripper Museum in Whitechapel and the recently opened pop-up museum East End Women: The Real Story near Shadwell played out in the national press only when there was a hint of confrontation. Not the type of publicity either would have sought but emotions run high where the hearts and minds of a community are concerned.

It all harks back to a planning application made to Tower Hamlets council in August 2015 allegedly for a women’s history museum that would celebrate East End women, but it later emerged as a Jack the Ripper museum. This was seen by both the wider public and women’s groups as little short of scandalous but founder Mark Palmer-Edgecumbe, (formerly Google’s head of diversity), stuck to his guns believing he had a sure-fire tourist attraction on his hands.

One has to bear in mind that to many the crime and poverty of Victorian East London is an undeniable part of its history but also an over-played one. To instead accentuate its significance at the heart of major turning points in women’s social and political transformation would certainly put the balance right. The Matchgirls from Bow who in 1888 went on strike for better working conditions, these underpaid, undernourished, overworked, factory workers changed the face of labour relations in Britain. Also in 1906 Sylvia Pankhurst launched a new branch of the Suffragettes movement in East London called the London Federation of the Women’s Social and Political Union. First in Canning Town, later Stepney, Bow and Poplar. More people know Jack The Ripper butchered women than know of Pankhurst’s achievements, which include broadening the cause of the Suffragettes to embrace the struggles of all working class EastEnders.

So Betty Warnock, who started the pop-up museum on May 20th, was outraged by this imbalance and initially started a petition stating ‘celebrate Suffragettes not serial killers’ which drew 13,000 signatures from locals calling upon the council to close the museum. Some might say rightly so because Jack the Ripper’s contribution to society was just about zero and owes his mark in history solely due to bloodlust and infamy. Yet somehow a museum celebrating him opens before one honouring more deserving names and causes. On the face of it Palmer-Edgecumbe could argue that it is just a commercial enterprise but wider cultural issues have made this enterprise something of a tinderbox.

Within days of posters going up telling the public to visit the pop-up instead of the Ripper museum these posters were defaced. Only then did it make the press, noticed by newshounds well aware that trouble was brewing and a cultural battleground emerging. The question is would you have heard of either museum if it wasn’t for them locking horns?’ It has been claimed that the mass media feeds the public stories of wars, bloodshed and confrontation of any kind because it sells well. Perhaps a society such as this has caused a Ripper museum to take precedence over a Suffragette one.

The Jack The Ripper Museum is on Cable Street, Whitechapel.