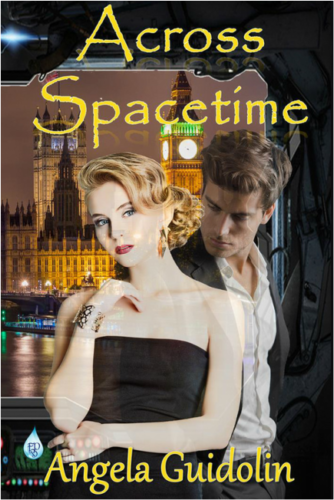 Review of: Across Spacetime (Book)

Despite the ubiquitous genre subject matter, science fiction authors will inevitably find different approaches to time travel. Refreshingly, Angela Guidon’s debut novel about time-travelling research students does exactly what it says on the packet, unlike a similar cult 1995 fiction called Say Nothing of the Dog! which set one intriguing new benchmark for dealing with research students time-travelling to 20th-century Earth and another for bizarre sci-fi titles. Which is a pretty mean feat when you consider the genre.

In stark contrast, Guidon’s more plain speaking narrative offers more easily absorbed sci-fi plot elements. Especially when all the characters speak in the first person and everything is written in the present tense in the manner of a person reporting on a real-time experience – a field study, as it were. As you can guess this presents the reader with an air of emotional detachment when introduced to the main protagonists.

Samir is a ‘human’ from the year 2651 who has returned to London in 1995 and is reporting on all the unusual incidents he stumbles across while living among his ancestors, which includes getting hangovers from West End night outs but without the convenience of being able to pop a cure-all pill dispensed from his own Utopian spacetime continuum.

By the time he hooks up with fellow time traveller, research student Beatrice, who is described as a Progressive (human from planets beyond Earth’s Solar System) and falls in love with her, you appreciate that every element of their existence is meticulously well-researched by the author, from their DNA tweaked to stop them getting each other pregnant during casual sex to their swanky hi-tec Swatches. But perhaps this techy and information-orientated approach to the narrative leaves it a little cold in places because you’re never fully invested in the characters as three-dimensional beings (human or otherwise).

The present-tense speaking Samir is a little too similar to the present tense speaking Beatrice and with only their first-person dialogue rather than the descriptive passages used in conventional novels to judge them, there isn’t enough to separate them as believable strangers who fall in love on the spot. Also, there’s always the danger that both are the author’s own voice. The characteristic quirks of Samir are often those of Beatrice. Samir reacts to not-so-bad news by feeling a little faint but on another page so does Beatrice. That may well be the case (let’s not be sexist here) but it skips an opportunity to sell them as ‘real’ people by giving them reactions more in keeping with well-defined character traits. Especially in a novel such as this which has a report-like nature that gives you little room to do anything else.

Moreover, the manner in which they meet and fall in love seems abrupt and without any meaningful story arc. This dehumanised report-like approach to their love story may be a deliberate device to present them as beings that are emotionally different from present-day humans. However, the Samir-Beatrice love story is the bread and butter of the novel and without it being dealt with in a way that connects with the reader on an emotional level (of some kind) it leaves a large hole which is filled inadequately with techy sci-fi speak.

Tagged with:     Across Spacetime, book