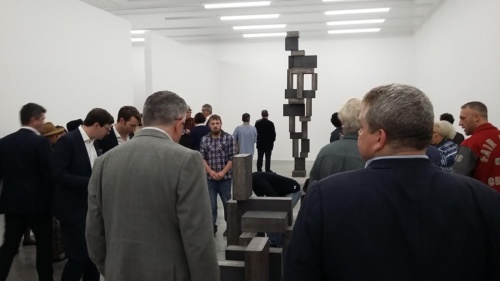 From Antony Gormley’s 1998 Angel of the North sculpture, perched on a Gateshead hill and commenting on North East social and post-industrial transition, to his current exhibition at The White Cube, Bermondsey doing much of the same about London, but in a totally different way (although The Angel of the North’s baby brother makes a face down appearance in one of the gallery spaces).

On the opening night the queue was so long it operated on an in-out rota to prevent damage to the exhibits. Rockstar-like popularity for a reputation as weighty as the materials he uses. No doubt, many of those sniffing around these block sculptures sought the answer to how they represented a London fascinated with ugly high rise buildings at the expense of a village-like quality that ought to be preserved. Explanation was found in the uncompromising hard edges, squares, rectangles and totemic blocks representing a personification of the communities exposed to tower-block existence and the monolithic architecture swallowing up the capital.

The White Cube is a fitting space for this Gormley solo exhibition, its name quite unintentionally connected to the Cubism movement of the early 20th century fond of geometric shapes and hard edges which Gormley’s exhibits translate as ‘tower block society.’ In fact continuing with the ‘Cube’ theme many of the sculptures have a puzzle-like Rubik’s Cube style twist and symmetry. Notably similar to the mechanical devices and passages which litter the Cube-shaped hi-tec dungeon in a 1997 sci-fi movie also called Cube. I can’t see this entertaining but instantly forgettable Canadian film being an influence though, yet Gormley also has a piece called ‘Passage’ here which is just that – a long black steel tunnel, with attendees queuing to sample its unique take on aesthetic representations of space.

You’ll find that many of the sculptures have at least a hint of a human form. Others have stronger human gestures Throughout though, an emphasis on heavy materials – concrete, steel and iron blocks, some that have the semblance of corroding iron and becoming almost orange in colour. The coffin-like air of the sculpture ‘Bond’ is in this class. It’s in an advanced stage of rust and set like a great, blocky, robot-like orange-brown figure lying supine on the gallery floor as if staring up at its own demise. What better way to show the death of oneself alongside the growth of the prison-like environment that walls us in.