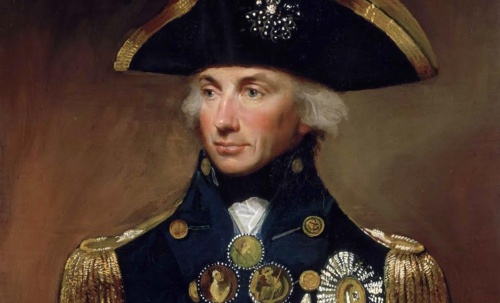 Britain’s greatest naval officer was born today September 29th in 1758 and no doubt the National Maritime Museum’s Nelson, Navy, Nation gallery on its 2nd floor will be paying tribute to his achievements in a fitting way. The humble son of a village rector became a Navy midshipman at an age when you were probably just into your 1st year at Secondary School. The 12 year old rose quickly though the ranks and by aged 20 had become captain of his ship.

His notable victories include historic duels with a Spain-France alliance which sought to cause unrest in Britain’s American colonies. Nelson took revenge by attacking Spain’s own colonies in the West Indies and Central America. Although some of his military decisions proved unpopular with the authorities causing him to be cold shouldered from the upper ranks, by 1793 those same authorities quickly came scurrying back, asking him to mount the naval fight against Revolutionary France.

Often in the line of fire, Nelson lost an arm from cannon fire during a naval skirmish at Santa Cruz de Tenerife in the Canary Islands and before that an eye during an attempt to recapture Corsica in 1797. A portrait of him in his bloodstained shirt after his arm was amputated hangs in the museum. It captures him writing a letter. We are told the contents express his sense of despair after this traumatic occurrence and his hopes for the future.

By 1803 he been made an admiral and viscount but war loomed because of Emperor Napoleon’s desire to invade England. The canny French leader hammered out a military pact with Spain, the two European powers forming a formidable joint fleet with Nelson later losing his life at the hands of a French sniper. However, this was only after the British fleet had routed their enemies at the Battle of Trafalgar. The snipers swarming around Nelson’s HMS Victory seemingly acting in desperation to recover a lost war. Nelson died victorious and Trafalgar Square was renamed in his honour after Nelson’s column was erected.