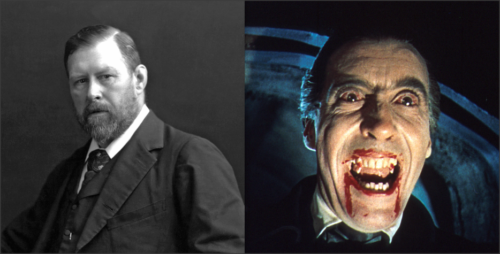 He’s the novelist who created the most widely known literary horror character outside of Frankenstein. Blood-sucking Count Dracula was responsible for many-a-troubled sleep with 1000 Dracula-themed books and 200 movies now available at the last count. Bram Stoker died in London on this date April 20th in 1912 aged 64 and was cremated in Golders Green Crematorium.

The Dublin-born author’s gothic novel was first published in 1897 and there were eleven other novels as well as short story anthologies. But it was Dracula which caught the public attention with an unmatched garlic waving fervour.

Before this success he worked as a journalist for the Daily Telegraph, and his love of theatre saw him move from a freelance position to writing their theatre reviews. He eventually became personal assistant for great actor Henry Irving and business manager for the Lyceum Theatre which called on him to relocate to London. With an obvious fondness for all things thespian, he married actress Florence Balcombe who settled with him in Chelsea.

His wife was a society beauty from a well-connected military family and she introduced him to one of her previous suitors Oscar Wilde who he had known briefly through university. Thereafter he became one of his more constant companions. He was also friends with distant relation Sherlock Homes creator Arthur Conan Doyle.

Although he never visited Eastern Europe where his most famous novel was set, Count Dracula was based on a Romania Prince called Vlad Dracula III who actually existed and ruled 15th century Wallachia, Transylvania. He was feared because of his cruel reputation and sadistic punishments which included impaling all who fell foul of him.