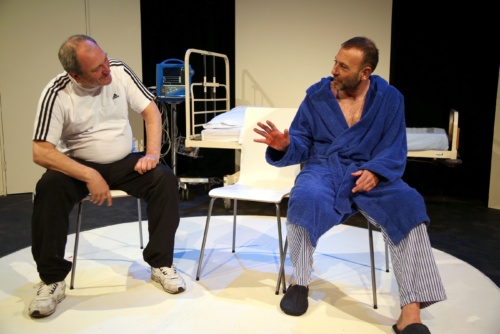 Written and directed by Yasir Senna and with an excellent central performance by Craig Karpel as businessman Mark, this psychological drama is two-hours of edge-of-the-seat entertainment driven by surprising plot developments and five-star natural, believable acting. There’s a casting director out there somewhere giving themselves a pat on the back.

Mark is stabbed seven times during a business deal gone wrong and tells investigating officers he was the victim of a car-jacking but does his story add up? Wife Verity (Niki Mylonas) at first is the supportive shoulder to cry on in the hospital but is among those going digging for dirty little secrets behind his back, with femme fatale French detective Kane (Rosalie Carn) just as suspicious.

His best mate David (Simon Ryerson) charges the buddy banter between the two with the type of forthright machismo that has you fearing a back-hander is never far away when they catch the culprit. It’s a clever device to pair them because you’re led to feel more sympathy for the presentable, affable Mark rather than his mouthy mate. However, David has layers beyond the brash and may well prove that all that glitters is not gold. Silver even. (There’s a reference to a silver Mercedes which is pivotal to the final scene).

And it’s these entertaining plot-turns and shocking revelations which keep you guessing till the end. No doubt, countless writing edits, sought a seamless presentation of the failings of human nature and found them in grave misdeeds dressed up as frolics, betrayal as loyalty and ignobility as honour.

The moody, ominous chiaroscuro lighting in one of the latter hospital scenes has Mark so strongly spotlit that the contrast across his face as he hesitates to answer the phone jacks up the suspense noticeably. This is a major departure from the lighting values in the scenes preceding and it’s at this point you know something’s up. And on cue who enters the hospital room unannounced and certainly uninvited but….

Now that would be giving the game away. But you’ll find that someone is treating life as a game they’ll end up regretting.