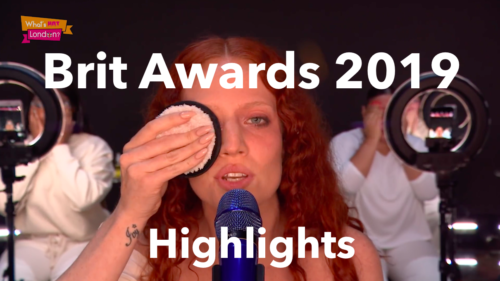 Awards season is in full swing continuing with the 39th annual Brit awards on Wednesday. Here’s a quick round-up of all the best bits in case you missed it.

Jack Whitehall was hosting for the second year running and he did a really solid job, performing little links throughout the show rather than an opening monologue. On the red carpet, there was no unifying theme like the white roses of last year, however we did get some pretty out there looks. Dua Lipa wore a Christopher Kane which appeared on the runway just two days ago while Daniel Lismore appeared to be dressed a bowl of punch.

The real standout feature of this year’s Brits were the performances. Hugh Jackman opened with ‘The Greatest Show’ and Pink closed the evening with an awesome rendition of her greatest hits. In between, we heard George Ezra with ‘Shotgun’, Calvin Harris with ‘Giant’, ‘Promises’ and ‘One Kiss’, and an awe-inspiring performance of ‘Thursday’ by Jess Glynne and H.E.R in which they removed their make-up while they sang.

For the first time in Brit history, there were as many women nominated as men and this led to a really diverse field across each award. George Ezra took home best male after a huge year while Jorja Smith took home best female. Anne Marie will perhaps be a little disappointed after going home with nothing despite four nominations. The 1975 won best group and the coveted best album, taking a stand against misogyny in their acceptance speech. Best single went to Calvin Harris and Dua Lipa for ‘One Kiss’, though some viewers were surprised to find out Harris was Scottish during their speech. Finally, Little Mix took home best video and from their reaction, it was clear this meant an awful lot to them.

Overall, this year’s Brit awards was very enjoyable, especially the performances. The only disappointment was that all 3 international winners (Drake, Ariana Grande and The Carters) failed to show, though in the end, it was probably their loss. If you’re watching Oscars, that is how you do an awards show.