DEC 19: On this day in 1843 Charles Dickens’ A Christmas Carol Published 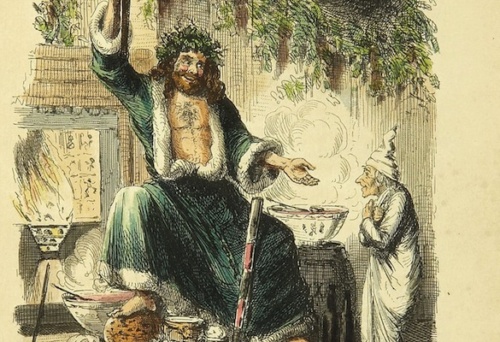 The full title of this novella was A Christmas Carol in Prose, Being a Ghost-Story of Christmas and was Dickens’ third Christmas themed-story, this being the longest but taking only six weeks to write. He was inspired to write it after a visit to Field Lane, Ragged School in London, which was a charitable institution providing free education for the most destitute. London publishing house Chapman & Hall released the book a few days before the Christmas of 1843.

It proved so popular that all 6,000 copies of the first edition sold out in days and by the time the London Ragged Schools Union had been established in 1844 the book it had inspired was already into its thirteenth edition. Ultimately, it became his best-selling work of fiction – helped in no small measure by the masterful illustrations by John Leech

“I have endeavoured in this Ghostly little book, to raise the Ghost of an Idea, which shall not put my readers out of humour with themselves, with each other, with the season, or with me. May it haunt their houses pleasantly.” – Charles Dickens, 1843

A Christmas Carol has been credited with inspiring many aspects of Victorian and post-Victorian Christmas festivities such as enjoying food, drink, dance and games in the company of family and close ones. The most important Christmas value Dickens inspired is the spirit of generosity existing within and outside the Christian faith as Christ’s birthdate approaches.

There’s been much debate over whether it was also a critique of Christian values; Scrooge representing a lack of love for mankind, which is transformed by supernatural incidences, albeit not very godly ones. The original idea came from a character in a Dickens short story published in the Pickwick Papers. In The Story of Goblins Who Stole a Sexton, a gravedigger who hates Christmas is kidnapped by goblins and only released when he changes his grinchy, miserly ways. Not very Christian themes but allegoric nonetheless.

A Christmas Carol proved so popular that Dickens was in full demand for public readings across the country, which proved as lucrative as book sales. To plump up for the readings he would go through a bizarre drinking ritual: spoonfuls of rum mixed with cream for breakfast, a pint of champagne for dinner, and just before going on stage a small measure of sherry mixed with raw egg. Filling himself with Christmas spirit in more ways than one, it seems!