Home  /  Features, Food & Dining, Galleries & Museums  /  Did You Know the World’s First Museum Restaurant Is in the V&A?

Did You Know the World’s First Museum Restaurant Is in the V&A? 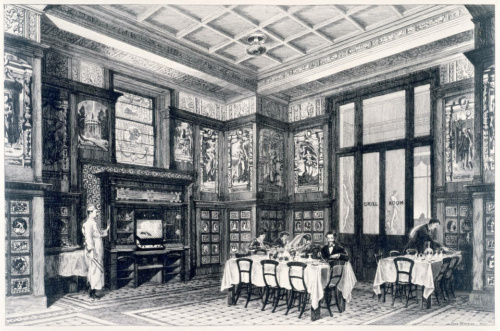 With over 2.27 million objects, the Victoria and Albert Museum, South Kensington is recognised as a world leader in collections of applied and decorative arts and design, but did you know it also has the world’s first museum restaurant?

Its three opulently decorated Victorian ‘Refreshment Rooms’ were built in the 1850s and 60s, timed to launch with the Great Exhibition of 1851. Founding director Henry Coles had an impressive cv, having managed the Great Exhibition and applied what he had learned and sought designers and architects who would leave a contemporary stamp on this society chill out zone. The Gamble Room would become admired for its luxury Renaissance Revivalist look, the Poynter Room its international flavour, while the Morris Room had all of the eclecticism of its designer, Victorian arts and design champion William Morris.

The, then, South Kensington Museum had a very definite social hierarchy with its best menus attracting the cream of London’s society who typically lived only a horse drawn carriage away. The first-class menu included steak pudding for a shilling and seasonal tarts for half a shilling. Those on the second-class menu enjoyed veal cutlets for 10 pence and poached egg and spinach for a shilling.

The third-class menu wasn’t even available in any of these lavish Refreshment Rooms but was laid out elsewhere in the building for the museum’s mechanics, workmen and working-class visitors. By the time it had been renamed the V&A after monarchs Victoria and Albert, the semblance of social inclusion was beginning to filter through to these ornate dining rooms.

It was originally named the very matter-of-fact Centre Refreshment Room but was later renamed in honour of its designer James Gamble. It’s obviously the centre option of the three rooms and also the largest, with a biblical inscription leaving you in no doubt of its function: “There is nothing better for a man than he should eat and drink and make his soul enjoy the good of his labour.” – Ecclesiastics.

With it’s huge spherical chandeliers, Victorian grandeur and eye-catching ornate dining features, it is without doubt the most dazzling of the three. In the late 1800s and early 1900s visitors compared it to the cafes of Paris. The columns and walls decorated in colourful majolica ceramic tiles are influenced by the tiling of the Renaissance. Stain glass windows, friezes, cherubs, elephants – even camels, you can pick them all out. 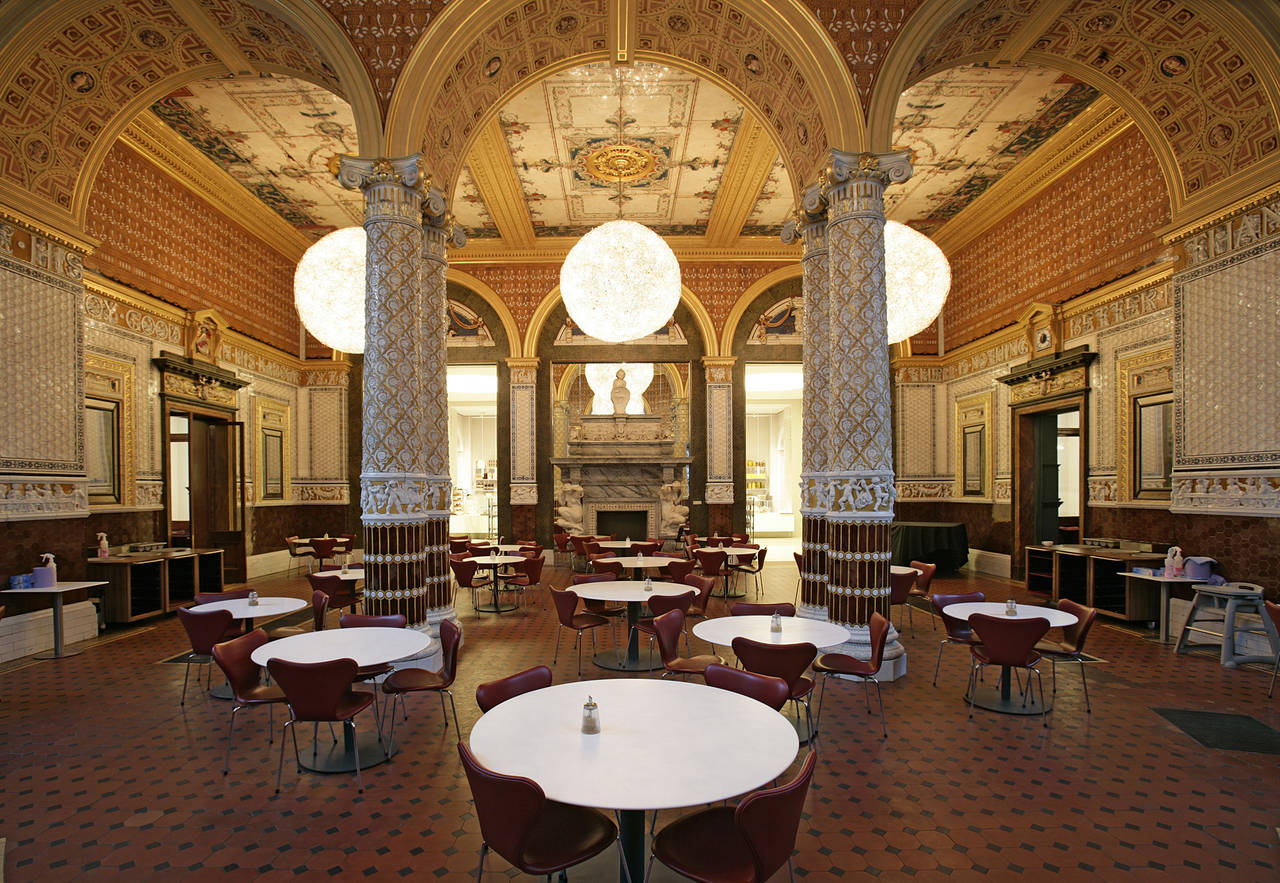 Designer William Morris was at the vanguard of the Art Nouveaux movement which flourished in the last decades of the 1800s but when hired to design this room he was still a relatively unknown 31-year-old. The swirling decorative elements of this art style are noticeable, as are Gothic Revival features and you can add a touch of the Pre-Raphaelites in the mix, as painter Edward Burne-Jones was one of his friends and helped with the design. Burne-Jones opted for zodiac sign symbolism and stain glass figures.

‘Have nothing in your house that you do not know to be useful, or believe to be beautiful.’ –William Morris

With such a painterly approach, it soon became a hangout for the art crowd with James Whistler and Edward Poynter regulars. However, it’s own designer William Morris preferred to eat in the Poynter Room. 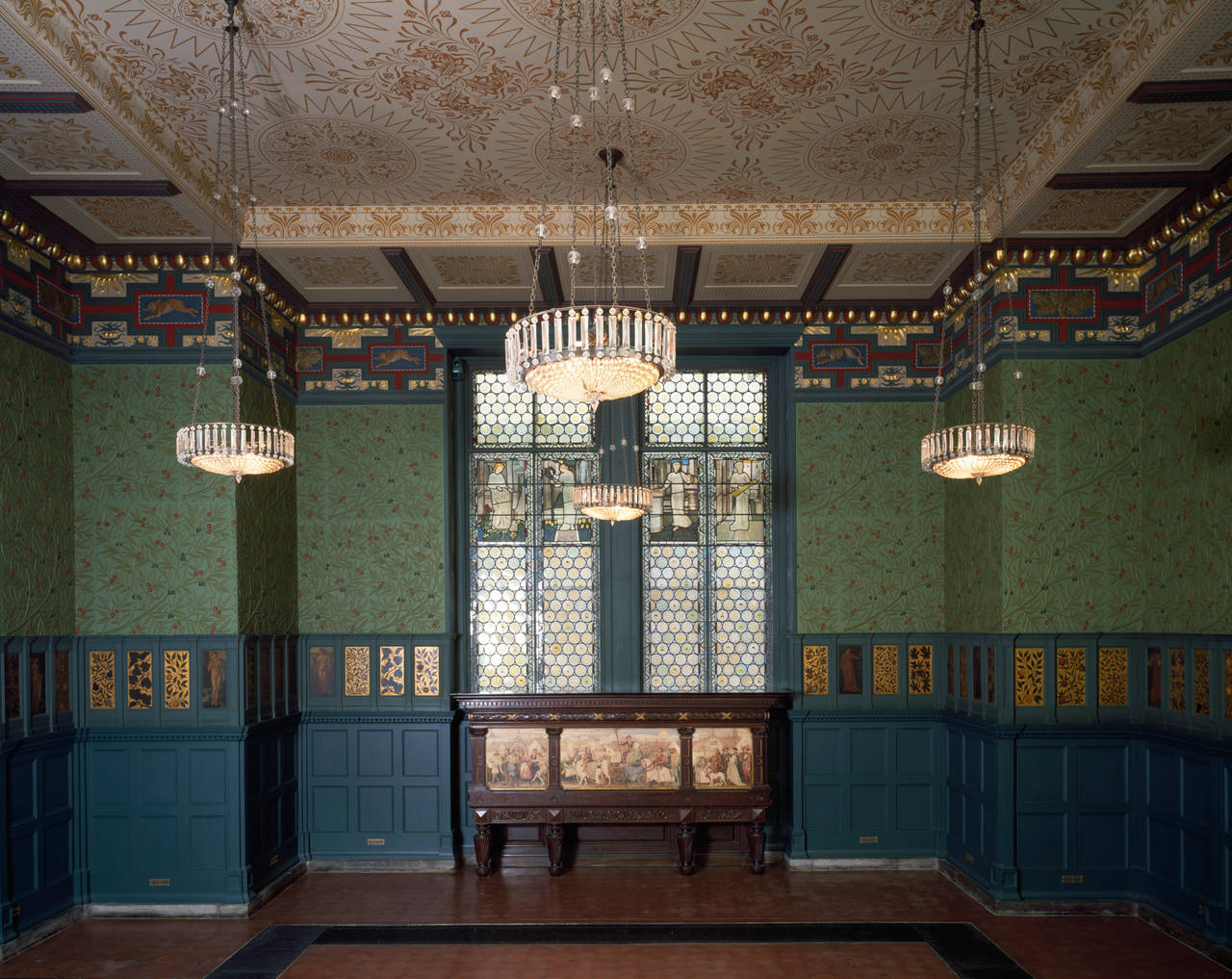 The art and design circle during this period was very close knit, with Whistler and Poynter both students under classical painter Charles Geyre at the same time. When not painting masterpieces, Whistler would visit the V&A to admire the design work of his pals. Poynter’s sister married Edward Burne-Jones so the incestuous fortunes of those in high circles never more marked than in the dining rooms of the V&A.

Painter-designer Poynter was respected amongst Victorian painter-designers and the obvious choice for this British institution. Inevitably, the Grill Room was also renamed after him even as the visitor numbers increased drawn by the broiled chops and steaks which gave the room its first name. Is that why William Morris preferred this room? Or was it the glazed ceramics on the lower walls with classical figures in Dutch blue paint while the upper walls had paintings on sets of tiles in a saturated blue-grey palette depicting the months and the seasons. 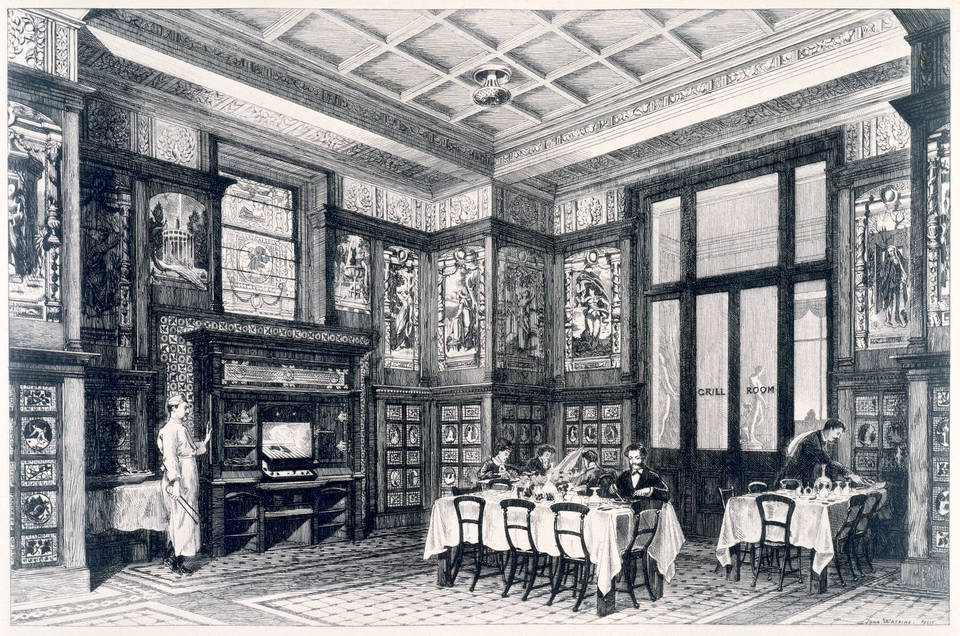 The Poynter Room is unchanged since the Victorian age. Photo credit – V&A

The V&A Leading The World

The world’s first museum to use gas lighting